– Global Manufacturing Update Indicates 80% Of The World Is Now In Contraction (ZeroHedge, Sep 3, 2012):

With the US closed today, the rest of the world is enjoying a moderate rise in risk for the same old irrational reason we have all grown to loathe in the New Normal: expectations of more easing, or “bad news if great news”, this time from China, which over the weekend reported the first official sub-50 PMI print declining from the magical 50.1 to 49.2, as now even the official Chinese data has joined the HSBC PMI indicator in the contraction space for the first time since November. Sadly, following today’s manufacturing PMI update, we find that the rest of the world is not doing any better, and in fact of the 22 countries we track, 80% are now in contraction territory. True, Europe did experience a modest bounce from multi-month lows of 44 in July to 45.1 in August (below expectations of 45.3), but this is merely a dead cat bounce, not the first, and certainly not the last, just like the US housing, and now that China is officially in the red, expect the next shoe to drop in Europe. Also expect global GDP to eventually succumb to the manufacturing challenges faced by virtually every country in the world, and to post a negative print in the coming months. 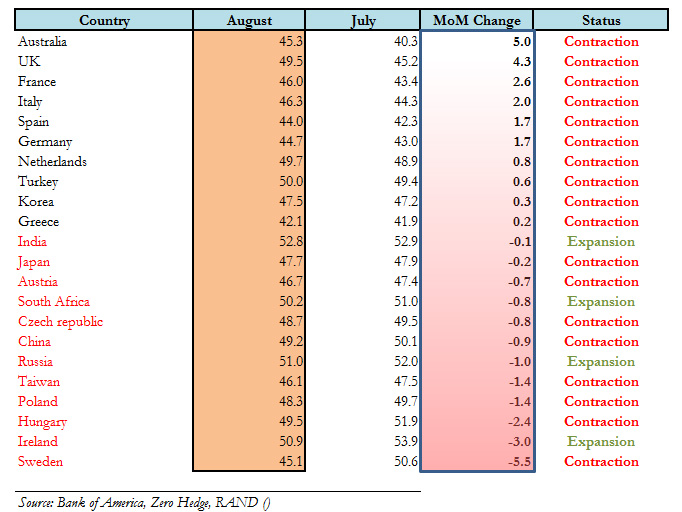 And charted via MarkIt: 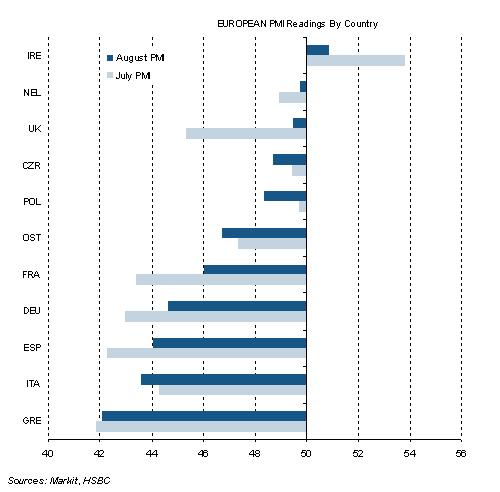 Some narrative to go with the pretty pictures via Reuters:

The downturn that began in the smaller periphery members of the 17-nation bloc is now sweeping through Germany and France and the situation remained dire in the region’s third and fourth biggest economies of Italy and Spain.

“Larger nations like France and Germany remain in reverse gear… the (manufacturing) sector is on course to act as a drag on gross domestic product in the third quarter,” said Rob Dobson, senior economist at data collator Markit.

Markit’s final Purchasing Managers’ Index (PMI) for the manufacturing sector fell from an earlier flash reading of 45.3 to 45.1, above July’s three-year low of 44.0, but notching its 13th month below the 50 mark separating growth from contraction.

“The rate of decline was a little slower than in July, providing some heart that the manufacturing downturn may be easing, but the sector is on course to act as a drag on gross domestic product in the third quarter,” Dobson said.

Having contracted 0.2 percent in the three months to June the bloc’s economy is seen posting similar results in the current quarter, with no growth expected until the start of next year.

In its battle to support an economy ravaged by a two-and-a-half-year-old debt crisis, the European Central Bank is now widely seen cutting interest rates to a new record low of 0.5 percent – either on Thursday or next month.

The output prices index fell from the flash reading of 48.9 to 48.6, above July’s 48.3. The input costs paid by factories also fell for the third month.

Factories in Germany, Europe’s largest economy, and France – the second biggest – saw activity fall for the sixth consecutive month although both saw an easing in the decline.

In Italy the main index (43.6) has now been below the break-even point for over a year and was worse than economists had predicted while in Spain it has been sub-50 since May last year.

The latter two countries are deep into austerity programs which are aimed at bringing their debt piles under control but also keep their economies stuck in recession.

They are looking for the European Central Bank help them escape this vicious circle by buying debt issued by their governments to bring down borrowing costs.

“The national picture remains one of widespread contraction, only Ireland saw manufacturing output rise. The situation in Italy is also becoming more of a cause for concern, as it falls further down the PMI league table,” Dobson said.

The output index for the sector, which drove a large part of the bloc’s recovery from the last recession came in at 44.4, below a flash 44.6 but above July’s 43.4.