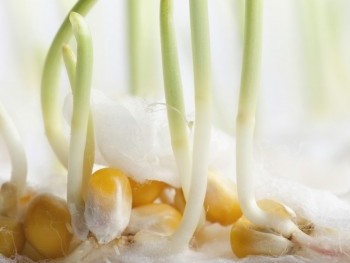 Scientists studying maize plants have found that the plants make clicking noises with their roots, and bend their roots toward similar sounds. (Selahattin BAYRAM/Photos.com)

Some plants may communicate by making clicking noises with their roots, according to new international research.

Using a microscanning laser Doppler vibrometer (a device to measure vibrations), the scientists recorded young maize plants making clicking noises with part of their roots. When the researchers broadcast similar sounds, the plants bent their roots toward it.

“Everyone knows that plants react to light, and scientists also know that plants use volatile chemicals to communicate with each other, for instance, when danger—such as a herbivore—approaches,” said study co-author Monica Gagliano from the University of Western Australia in a news release.

“I was working one day in my herb garden and started to wonder if maybe plants were also sensitive to sounds—why not?—so I decided as a scientist to find out.”

Many plants are known to respond to sound. For example, vibrations cause sensitive plants to fold their leaves, and flowers like blueberries and tomatoes only release pollen at the ultrasound frequency of a bee’s wing flap.

Researchers believe plants may also have ears, although very different from ours, and that sound is a much simpler communication method than releasing chemicals into the air.

“Eardrums and cochlear structures are just one possible, admittedly sophisticated, solution, but by no means constitute an essential requirement for hearing,” they write in their paper, mentioning the mechanically ultrasensitive Johnston’s organ at the base of antennae in mosquitoes and fruit flies. They also mention that snakes use their jawbones as coupling elements to detect ground-borne vibrations.

So what are the plants saying to each other? They may have a lot to talk about, according to the researchers, including how to share the available growing space and where to put their roots.

“For long-range signaling, other functions related to resource finding, intra- and/or extra-specific competition or cooperation, and growth orientation and coordination within the substrate can be envisaged.”

Since the 1960s, scientists have suspected that there is more to plants than meets the eye. Several researchers, such as Cleve Backster, have found that polygraph tests detect emotion in plants just as they do in humans. Other researchers claim that plants can read people’s minds.

In January, a team at Oxford University claimed that grass and pea plants knew when nearby plants were facing a drought. Although the plants had enough water themselves, they closed the pores in their leaves when neighbors were short of water. After a few hours, they seemingly realized that they were not in danger and opened their pores again.

Gagliano and her peers have called for further research into exactly how plants hear. Their study was published in Trends in Plant Science.