Back on May 10, when JPMorgan announced its massive CIO trading loss (which may or may not have been unwound courtesy of a risk offboarding to another hedge fund which may or may not be backstopped by the Fed as the massive IG9 position was not novated but merely transferred) JPM also disclosed something else which may have bigger implications for the broader, and just downgraded, banking sector. As a reminder, in the 10-Q filing, the bank reported a VaR of $170 million for the three months ending March 31, 2012. This compared to a tiny $88 million for the previous year. According to the company, “the increase in average VaR was primarily driven by an increase in CIO VaR and a decrease in diversification benefit across the Firm.” What JPM really meant is that after being exposed in the media for having a monster derivative-based prop bet on its books, it had no choice, as it was no longer possible to use manipulated and meaningless risk “models” according to which the $2 billion loss, roughly 23 sigma based on the old VaR number, was impossible (ignoring that VaR is an absolutely meaningless and irrelevant statistical contraption). Turns out it is very much possible. Which brings us to the latest quarterly Office of the Comptroller of the Currency report, and particularly the chart on page 7. More than anything it shows what happens when a big bank is caught red-handed lying about its risk exposure. We urge readers to spot the odd one out. 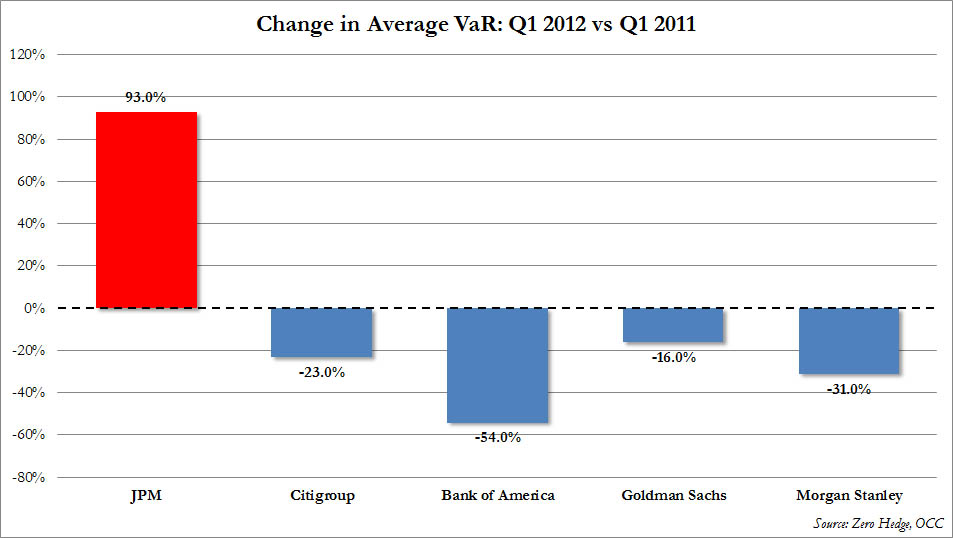 Another way of visualizing the change: 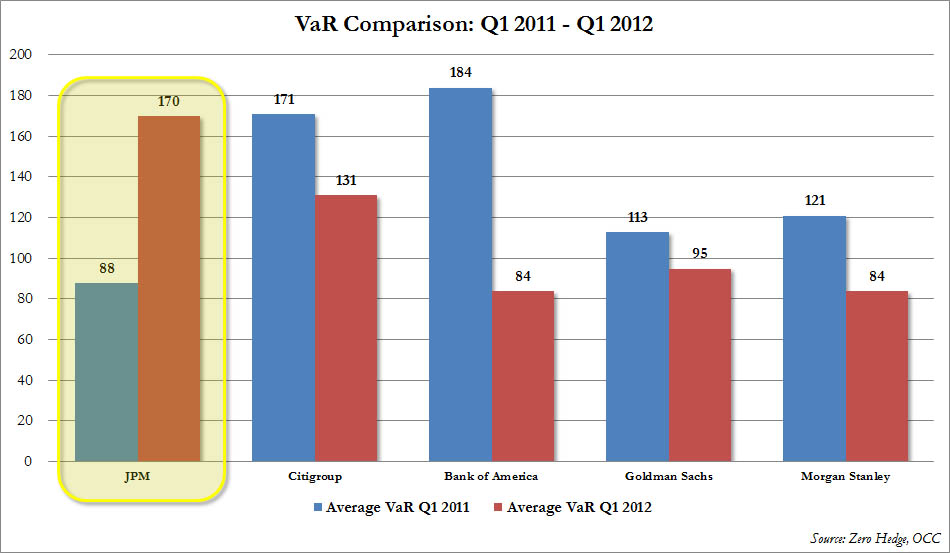 That’s correct: the 93% increase in JPMorgan VaR from Q1 2011 to Q1 2012 is solely due to the sudden “realization” that the world’s biggest bank by derivative holdings (at just about $73 trillion) is in reality nothing but a glorified hedge fund.

Which brings up three important questions:

For Question 3 we may have a suggestion.

Below we present a chart showing the historical distribution of derivative holdings at Morgan Stanley HoldCo, and Morgan Stanley Bank NA, also per the OCC. 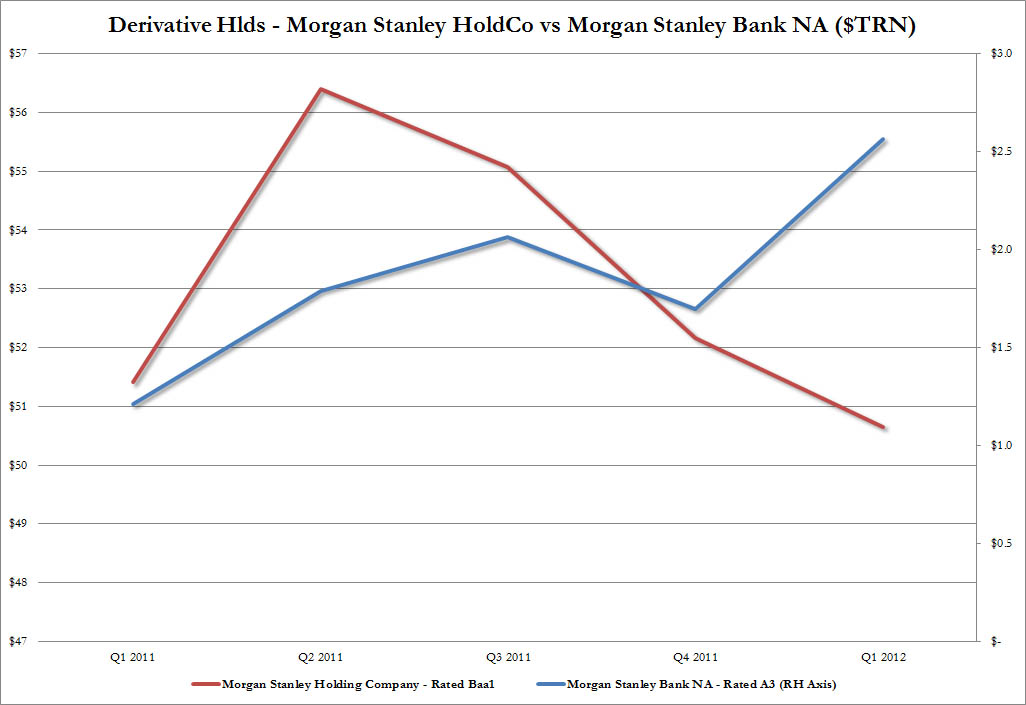 What is notable is that MS is aggressively shifting derivative exposure from its HoldCo to its Deposit unit Morgan Stanley Bank NA. Why? The below summary chart from Thursday’s Moody’s downgrade of the bank should provide a hint:

What is happening is that Morgan Stanley is moving ever more derivatives from its just Baa1-downgraded (the third lowest investment grade rating) HoldCo to its still A-rated (even if at the lowest A3 rating) depositor entity (yes, Morgan Stanley apparently has deposits, but don’t look for ATMs). The simple reason being that MS’ counterparties are increasingly reluctant to transact with Morgan Stanley unless they get the implicit backing of some real cash as opposed to just promises by a bank that may be the next in line after JPM to report of a VaR “glitch.”

In other words: more and more depositors are being involuntarily placed on the hook to allow the bank to even have the remote chance of generating the same kinds of “hedge fund” type-profits as it did in the past 3 years. Because without its derivative book, MS is just another non-prop trading bank, whose return on equity in a ZIRP environment is at best laughable thanks to a Net Interest Margin which is, well, non-existent.

We just wonder: in light of the recent JPM fiasco, and in light of what is a creeping transfer of trillions in derivatives exposure to an entity where depositors, and eventually taxpayers, would be stuck footing the bill, and more importantly, in light of a 31% drop in Y/Y VaR even as JPM’s has nearly doubled after being exposed for being nothing but a glorified Fed-backstopped hedge fund (as we suggested back in April before anyone knew the scope of the JPM derivative-based exposure), shouldn’t someone: the Fed, the SEC, the OCC, or anyone for that matter, be finally asking Mr. Gorman just what he has going on in his books?