Capitalists have been gripped by ‘systemic fear’ making them worry not about the day-to-day movements of growth, employment, and profit, but about ‘losing their grip’. An interesting recent article by the Real-World Economics Review on the Asymptotes of Power focuses on the fact that the capitalists are forced to realize that their system may not be eternal, and that it may not survive in its current form. The authors fear that, peering into the future, the ‘1%’ realize that in order to maintain (or further increase) their distributional power (their net profit share of national income – which hovers at record highs) they will have to unleash even greater doses of social ‘violence’ on the lower classes. The high level of force already being applied makes them increasingly fearful of the backlash they are about to receive (think Europe to a lesser extent) and nowhere is this relationship between the wealthy capitalists and social upheaval more evident than in the incredible correlation between the Top 10% share of wealth and the percent of the labor force in prison. In order to have reached the peak level of power it currently enjoys, the ruling class has had to inflict growing threats, sabotage and pain on the underlying population. 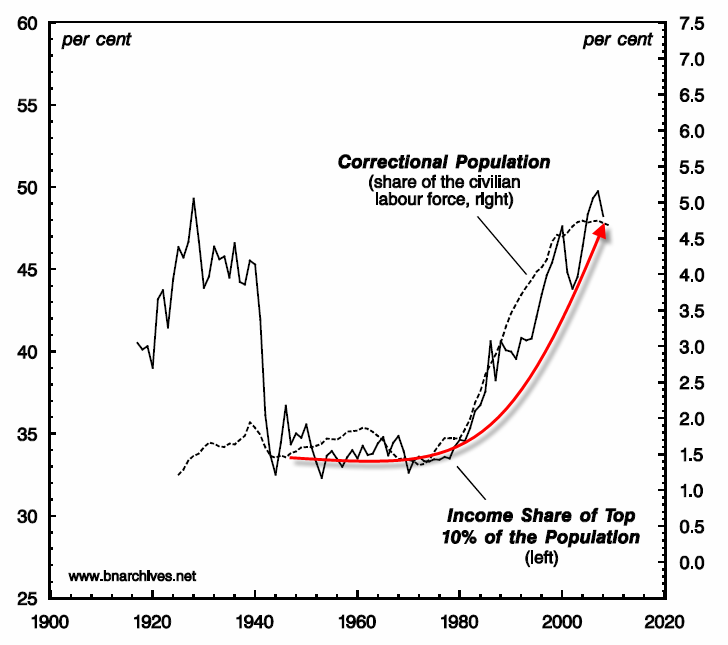 During the 1930s and 1940s, this level proved to be the asymptote of capitalist power: it triggered a systemic crisis, the complete reordering of the U.S. political economy, and a sharp decline in capitalist power, as indicated by the large drop in inequality.

As we can see, since the 1940s this ratio has been tightly and positively correlated with the distributional power of the ruling class: the greater the power indicated by the income share of the top 10 per cent of the population, the larger the dose of violence proxied by the correctional population. Presently, the number of ‘corrected’ adults is equivalent to nearly 5 per cent of the U.S. labour force. This is the largest proportion in the world, as well as in the history of the United States.

Nowadays, the notions of systemic fear and systemic crisis are no longer farfetched.

In fact, they seem to have become commonplace. Public figures – from dominant capitalists and corporate executives, to Nobel laureates and finance ministers, to journalists and TV hosts – know to warn us that the ‘system is at risk’, and that if we fail to do something about it, we may face the ‘end of the world as we know it’.

There is, of course, much disagreement on why the system is at risk. The explanations span the full ideological spectrum – from the far right, to the liberal, to the Keynesian, to the far left. Some blame the crisis on too much government and over-regulation, while others say we don’t have enough of those things. There are those who speak of speculation and bubbles, while others point to faltering fundamentals. Some blame the excessive increase in debt, while others quote credit shortages and a seized-up financial system. There are those who single out weaknesses in particular sectors or countries, while others emphasize the role of global mismatches and imbalances. Some analysts see the root cause in insufficient demand, whereas others feel that demand is excessive. While for some the curse of our time is greedy capitalists, for others it is the entitlements of the underlying population. The list goes on.

But the disagreement is mostly on the surface. Stripped of their technical details and political inclinations, all existing explanations share two common foundations: (1) they all adhere to the two dualities of political economy: the duality of ‘politics vs. economics’ and the duality within economics of ‘real vs. nominal’; and (2) they all look backward, not forward.

As a consequence of these common foundations, all existing explanations, regardless of their orientation, seem to agree on the following three points:

Although there are no hard and fast rules here, it is doubtful that this massive punishment can be increased much further without highly destabilizing consequences. With the underlying magma visibly shifting, the shadow of the asymptote cannot be clearer.