In a developing story that is raising concerns over a potential nuclear cover-up by the EPA, alarming amounts of radiation were reported near the border of Indiana and Michigan and later censored by the EPA online geiger tool.  The readings, which were captured in a screenshot, measured as high as 7,139 counts per minute (CPM). This is particularly startling, as the normal radiation levels are generally between 5 and 6 CPM. Sources say that a Department of Homeland Security hazmat team has now been dispatched after ‘years’ of inactivity.

A number of community reports have came in on the subject in fact, with readers of community boards and concerned citizens offering up some interesting and intriguing information regarding the potential radiation cover-up. Discussion over the information first began to surface on internet boards like Reddit and user-submitted news source Digital Journal. In the Reddit submission, which ultimately reached thousands of comments — many from those in the area who had contacted radiation monitoring stations and other affiliated individuals — and brought some further information to light.

One Reddit reader, an eyewitness who reportedly attends a nearby University shared some concerning information which quickly rose to the top and was later confirmed by accompanying comments. According to the user, a large fleet of hazmat team members and reponse trucks funded by Homeland Security have been dispatched after years of inactivity. The comment, which has been screen captured for preservation, states:

“I work at a large public university next to a small research reactor that’s located near the back of campus. There’s (normally) a large fleet of hazmat response trucks and trailers parked in the nearby lot. Most of them are NIMS early response vehicles funded by Homeland Security (says so right on them). Haven’t seen them move once since I started working a few years ago. Tonight? All gone.”

The Digital Journal submission, however, was promptly edited and much of the shocking detail in the original post was wiped away. They quickly added an edit stating that the measurements must be false due to the fact that they were so high. Comments quickly cited the changes to be inaccurate and bizarre. One comment, currently at the top of the page, states:

“I don’t buy this false alarm stuff for one min! There are other independent sources doing their own measuring and coming up with similar results.”

As the comment mentions, a number of private organizations have recorded the radiation spike using their own methods to monitor the spike. One such measurement coming from the Radiation Network  in Fort Wayne, recorded a massive increase in radiation as seen in the released image below: 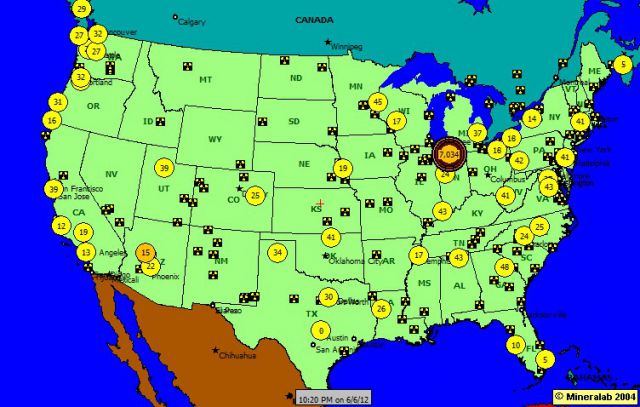 Amid the publicity, most likely amounting to hundreds of thousands of visitors to Radiation Network’s website regarding this image — which supports the fact that there is a massive and ongoing radiation cover-up — Radiation Network then issued a quick and delayed message on their homepage stating that they must have experienced an error in their system. Additional findings however, which are now censored to the public, confirm the findings once displayed by the Radiation Network. Again, you can view the original numbers in the screen capture showing the results before they were terminated from viewing by the EPA.

Therefore, to add even more credibility to the spike being much more than an unforeseen error, the increase was actually measured from two entirely different and privately owned locations (BlackCat and the Radiation Network). What this means is that the statements regarding the reading being nothing more than small fluke in the system appear to be quite impossible.