US firm KBR, which helped build detention camp, among consortiums bidding to run police services in West Midlands and Surrey 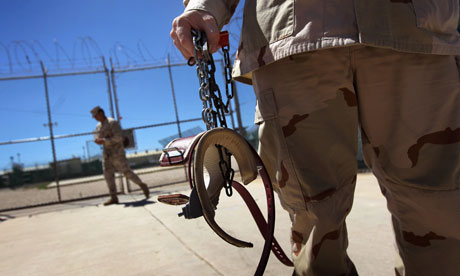 US Pentagon contractor Kellogg Brown & Root, which helped build the Guantánamo camp, is bidding for a £1.5bn privatisation contract to run policing services in Surrey and the West Midlands. Photograph: John Moore/Getty Images

A US Pentagon contractor that was involved in building Guantánamo Bay is on a shortlist of private consortiums bidding for a £1.5bn contract to run key policing services in the West Midlands and Surrey.

The Texas-based Kellogg Brown & Root, which was sold off by the controversial Halliburton corporation in 2007, is part of a consortium which has made it to the final shortlist for a contract that will see large-scale involvement of the private sector in British policing for the first time.

When KBR was still part of Halliburton it won a large share of Pentagon contracts to build and manage US military bases in Iraq after the 2003 invasion. Its former chief executive, Dick Cheney, was US vice-president.

The Guardian has learned that 15 groups of companies and individual firms have made it on to the most recent shortlist. More than 200 firms initially expressed an interest at a “bidders’ conference” held in March.

Chris Sims, the West Midlands chief constable, told the FT last month that his force was a good testing ground for fundamental change as he battles to find £126m of budget savings. He said that the armed forces had already embraced a greater role for the private sector more fully than the police without sparking uproar.

Sims cited the KBR as one example as the Texas company employs the large contingent of civilian staff managing the British Camp Bastion in Afghanistan.

A KBR spokesman has confirmed to the Times its interest in the West Midlands/Surrey contract: “KBR is not involved in policing, our objective in the privatisation of the police force is to get more police doing actual police work while KBR brings operational efficiencies to the back office with the objective of achieving an overall lower cost of service while improving service levels,” said a spokesman. “We are an operational support company whose capabilities are transferable to critical, uniformed, command-led environments such as the police.”

A joint statement by the West Midlands and Surrey forces said they were still in the early stages of the procurement process: “There are a number of commercial organisations expressing an interest in working in partnership. It is inappropriate at this time to comment on the interests of these organisations.”

But the disclosure raised fears among critics that the contract is close to privatising core elements of policing: “This is the latest move that seems to be designed to make the police more and more remote from the public we serve,” said Julie Nesbit of the Police Federation.

“We believe simply that if you call a cop, you should get a cop, not a security guard, not a uniformed civilian nor an employee of a major international conglomerate. We believe it’s what the public expect and believe that there should be a public debate before parts of the police service are sold off to the highest bidder.”

Derek Barnett, president of the Police Superintendents’ Association, called for greater public consultation over moves towards privatisation. “The legitimacy of policing stems from the fact that it takes place with the consent of the public,” he said. “It is only right, therefore, that the public should have a say in who they want to deliver operational policing services.”

Unite national officer Peter Allenson said there was a lack of awareness among the public about the proposals.

“The police are fundamental to the society we live in. This is an issue of major importance, yet the government are pushing through privatisation at breakneck speed without proper public consultation.”