Gulf of Alaska Keeper, a non-profit organization that estimates it has cleared nearly 1,000,000 pounds of plastic debris from Alaskan coasts over the past 10 years, is reporting “tons” of what it believes is likely tsunami debris washing up on the coasts of the Kayak and Montague islands. Chris Pallister, president of Gulf of Alaska Keeper, told Alaska’s KTUU TV that ““It’s a staggering mess […] the magnitude of this is just hard to comprehend and I’ve been looking at this stuff a long time.”

In an email to The SunBreak, Pallister let loose:

In my opinion, this is the single greatest environmental pollution event that has ever hit the west coast of North America. The slow-motion aspects of it have fooled an unwitting public. It far exceeds the Santa Barbara or Exxon Valdez oil spills in gross tonnage and also geographic scope. (I was in Prince William Sound during the during the Exxon Valdez oil spill and so have a sense of comparison).

Tens of thousands of miles of coastline from California to the Aleutian Islands are going to be hit with billions of pounds of toxic debris. NOAA’s latest estimate is that 1.5 million tons of largely plastic debris will hit the western United States coast. That is 30 billion pounds. We expect Alaska to get the largest percentage of that with much of it lodging on northern Gulf of Alaska beaches. Most of this will be plastic which is full of inherent toxic chemicals that will leach into the environment for generations.

Possibly worse are the millions of containers full of anything from household chemicals to toxic industrial chemicals that are floating our way. They will eventually burst upon our shores…in sensitive inter-tidal spawning and rearing habitat, endangering shorebirds, marine mammals, fish and everything in between. We are already finding empty and partially full containers of tsunami related chemicals and fuel drums along the northern Gulf of Alaska shoreline. The heavier fuller containers will come later because the wind doesn’t push them as fast toward the Gulf of Alaska as they are more current driven. The light-weight, high-windage debris such as Styrofoam, buoys, bottles, empty containers and drums have already arrived in staggering quantities.

Everyone is careful to say the debris is only “suspected” of having come from Japan’s March 2011 tsunami; there is plenty of marine debris on the ocean in general. Here is Pallister on the scope of the everyday marine debris problem.

But the newer condition and quantity of the debris that has been seen–”chunks of pink and blue insulation, which appear to be from buildings [and] white and black floats the size of oil barrels”–argue for the use of Occam’s Razor. This isn’t the first debris with Japanese printing to show up off our coasts: a soccer ball was returned to its owner, and a derelict fishing ship was sunk before it interfered with shipping lanes.

The problem is that it’s early. The estimated time of arrival for the debris, in whatever shape, radioactive or not (KTUU says not), was supposed to be 2014. Senator Maria Cantwell (D-WA) has been spearheading, with Senator Mark Begich (D-AK), a multi-pronged effort to prepare for the debris and protect the West Coast from being submerged beneath it. Cantwell has asked President Obama to give the National Science Foundation emergency funds for research to help better track tsunami debris and develop response plans, and has been pressuring the administration to rethink a 25-percent budget cut for NOAA’s Marine Debris Program.

On hearing of the extent of the recent debris washing ashore, Begich released a statement that said: “The time for talk is over.  The prospect of debris coming to our shorelines is not just a theory, it is here. I urge the Obama Administration to respond to our request from several weeks ago to free up funding and resources so we can effectively deal with this debris and not be scrambling when it arrives.”

That seems like common sense, but as Pallister explains: “Unlike an oil spill or industrial environmental accident, there are no easily identifiable culprits with deep pockets that can be pursued to help pay for the clean up. This will all be on the American taxpayer, so you can understand the glacial pace of the response preparation.”

NOAA has since released this somewhat ominous updated graphic illustrating their understanding of how much tsunami debris is still headed this way. You’ll want to refer to this pdf on “What to do if you see debris,” in preparation. 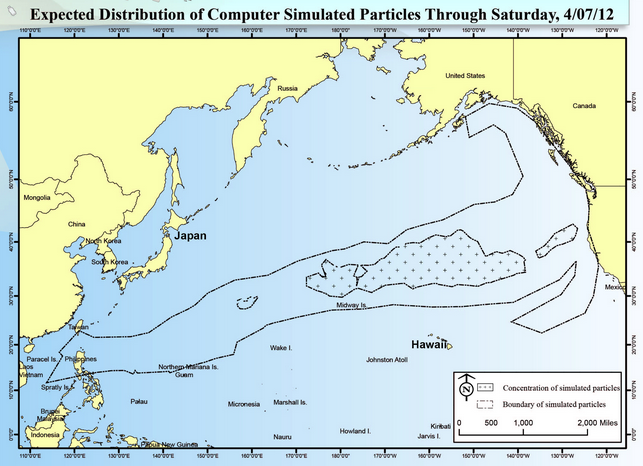