… as intended by the elitists.

And while the bankers (on both sides of the table) haggle about how to best leech Greece even dryer (with a solution due any hour, day, week now), the actual people are starting to wave the white flag of surrender. Because the opportunity cost of every additional coupon payment is having a direct, immediate and increasingly more dire impact on virtually every aspect of the economy. Kathimerini reports that “about 160,000 jobs will be lost this year in the commerce sector, according to the National Confederation of Greek Commerce (ESEE) as the constant decline in disposable income has led to a sharp drop in turnover and a steep rise in the number of enterprises shutting down.” Indicatively, the latest Greek employment figures per the IMF, show  that 4.156MM people are employed. So commerce alone is about to lead to a 4% drop in total jobs. As the chart below shows, net of just this sector, Greek jobs are about to go back to 2010 levels. What this means for the Greek unemployment rate, and for GDP we leave to our readers, although the ESEE does a good job of summarizing what to expect: the “ESEE warns that soon Greece will be in a condition of absolute poverty.” And that, ladies and gents, is how Europe slowly but surely reentered the Feudal age, and what every other country in the European periphery that has a massive debt load, and no surplus (actually make that every country in the world), has to look forward to: absolute poverty, aka debt slavery. 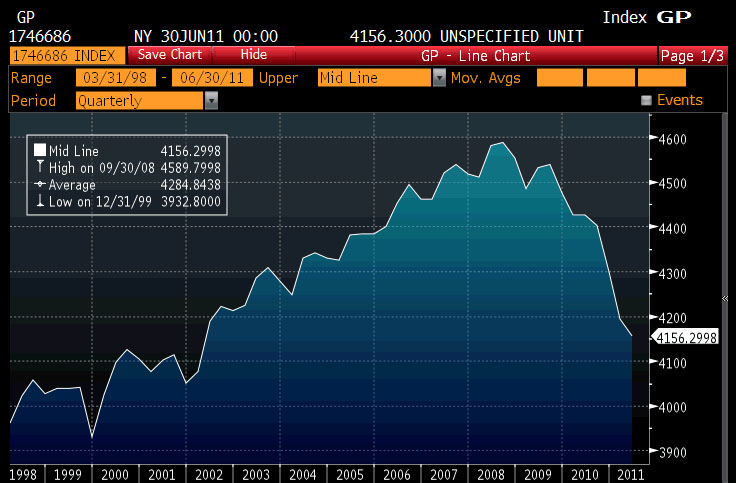 The jobs to be lost concern 60,000 employers and 100,000 employees in the sector, ESEE expects. Given the data for a 6.2 percent fall in household consumption in 2011 and the Eurostat forecast for a further decline by 4.3 percent this year, ESEE warns that soon Greece will be in a condition of absolute poverty.

With 60,000 enterprises having shut down since the start of the crisis to date, their number is set to double by the end of this year, ESEE estimates.

Once again, it appears that Chuck Palahniuk will be proven right when stating that it’s only after we’ve lost everything, that we are free to do anything; and it will be up to the Greeks to prove him right.