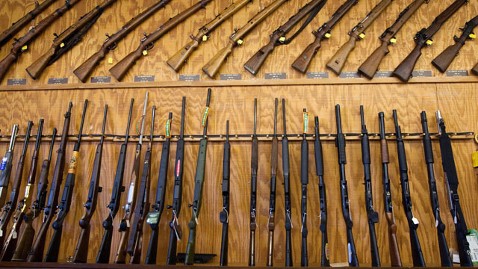 Americans were big spenders on Black Friday–especially on guns.

Numbers from the Federal Bureau of Investigation show an all-time one-day high for background check requests from gun buyers last Friday. There were 129,166 requests to the National Instant Criminal Background Check System (NICS)–a third more than the previous record of 97,848 on Black Friday 2008, FBI spokesman Stephen Fischer said. On Black Friday last year, there were 87,061 requests.

The numbers, first reported in USA Today, reflect the experience of gun-sellers on the ground. “It was the biggest rush we ever had. Some of the people at the gate sent their kid running to the gun counter to get in line,” said Tom Ritzer, store manager at MC Sports in Springfield, Mo., which opened its doors at 5 a.m. on Black Friday. Gun buyers had to wait until NICS opened at 7 before they could leave with their purchases, he said.

The store sold 70 guns, a mix of rifles and handguns, with big sellers including an $85 World War I replica rifle that is a collector’s item and a$219 Smith &Wesson .22 handgun. Last year the store, which only started carrying guns in 2009, sold 41 on Black Friday.

Walmart, which sells guns in 1,650 of its more than 3,800 stores, does not release sales figures and could not comment, spokeswoman Sarah Spencer said.

The reason for the uptick is not clear. “You do see spikes when stuff happens like that shooting in Arizona,” said Ritzer, referring to the shooting of Sen. Gabrielle Giffords in January. “I don’t know what the scare is right now.”

Gun buyers may be on a shopping spree partly because of the economy and its impact on the criminal justice system, suggested Andrew Arulananbam, a spokesman for the National Rifle Association. “They read in the headlines stories about prisoners having furloughs and law-enforcement being laid off,” he said. “They realize it’s going to be up to them to protect themselves and their families.”

But Caroline Brewer, a spokeswoman for the Brady Center to Prevent Gun Violence, said the Black Friday sales surge “might say something about marketing” but didn’t reflect actual patterns in U.S. gun ownership.

“The trend that has been observed for decades now is that fewer and fewer Americans own guns, but those who do own continue to add to their stock,” Brewer said.

She cited the University of Chicago’s General Social Survey, which found that household gun ownership hit its peak in 1977, when 54 percent of American households reported having any guns. By 2010, this
number had dropped to 32 percent.

“There’s been a whole lot of hysteria raised by the NRA about the need to stockpile guns because (President) Obama’s going to take your guns away,” Brewer said. “It may mean more gun owners are buying more guns.”