Benjamin Netanyahu’s right-wing coalition has been accused of trying to turn Israel into a “dictatorship” after it introduced legislation to tame senior judges and human rights groups opposed to its settlement construction policies. 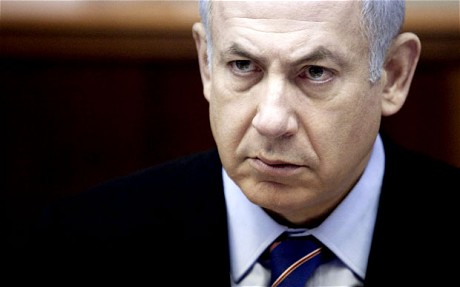 Members of the Kadima, the principal opposition party, waved black flags to mourn the “death of democracy” after Israel’s parliament, the Knesset, passed two bills that will tilt the balance of the country’s Supreme Court sharply to the right.

The legislators involved in the protest had their flags confiscated before being expelled from the Knesset’s chamber at the orders of the speaker.

The passage of the bills has prompted outrage among many Israeli politicians who see them as an assault on the independence of the judiciary, one that would undermine the country’s cherished democratic foundations.

Tzipi Livni, the leader of the opposition, accused Mr Netanyahu of an “attempt to transform Israeli into a type of dictatorship,” while her Kadima party claimed that the legislation represented the “gravest” challenge to democracy since the establishment of the state in 1948.

Under the legislation, which must go through two further readings before becoming law, legal obstacles preventing a conservative judge, Asher Grunis, from becoming president of the Supreme Court would be lifted.

A fellow conservative would also be appointed to a committee that appoints judges on the court.

Mr Netanyahu’s coalition has been infuriated by a number of the court’s orders to dismantle “outposts” built by hardline settlers in the West Bank without planning permission.

All Jewish settlements built on territory considered Palestinian are regarded as illegal under international law, but Israeli law only prohibits outposts, which were mostly built after 2001. Under the terms of the Bush-era Roadmap, Israel pledged to dismantle outposts and to freeze all settlement construction, but Mr Netanyahu has declined to do either and has pressed for the legalisation of outposts.

Uzi Landau, a cabinet minister, said the legislation was necessary because of the Supreme Court’s opposition to such policies.

“It is left wing, political, detached from Judaism and at times from reality, and allows itself to intrude into places where it has no business,” he said.

Supporters of the legislation say they will now push for a third bill that would allow the Knesset to veto the appointment of any Supreme Court judge of whom it disapproves.

The passage of the bills came a day after a cabinet committee gave its backing to measures that would effectively end foreign funding to Israeli human rights groups that have challenged the government on settlements and other policies affecting Palestinians.

The legislation, which is modelled on similar laws passed in Russia, Venezuela, Belarus and Uzbekistan, has drawn warnings from Britain and the European Union that Israel’s democratic standing in the West will suffer if it passed.

Britain gave £300,000 to Israeli human rights groups last year. Under the proposed bills, such groups would only be able to receive £3,300 a year from foreign bodies, including the United Nations. They would also have to pay 45 per cent tax on those contributions.

Further courting controversy, right-wing Israeli MPs say they now also want to introduce a bill to strip Arabic, the native tongue of the country’s substantial Israeli-Arab population, as one of the country’s official languages.