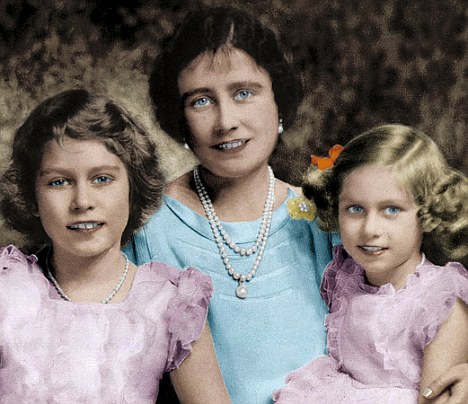 The Queen Mother with Princess Elizabeth and Princess Margaret in 1937

– The Queen’s hidden cousins: They were banished to an asylum in 1941 and left neglected now an intriguing documentary reveals all (Daily Mail, Nov. 11, 2011):

The date was 29 July, 1981, Prince Charles and Lady Di’s wedding day, and as the Queen arrived at St Paul’s Cathedral and waved to the crowds, two women in late middle-age, in shapeless, baggy dresses, shuffled with clumsy gait up to the television and waved and saluted back to her, unable to articulate speech but making excited noises.

It was a poignant moment, recalls Onelle Braithwaite, one of the nurses who cared for them. ‘I remember pondering with my colleague how, if things had been different, they would surely have been guests at the wedding.’

The two women were Nerissa and Katherine Bowes-Lyon – nieces of the Queen Mother and first cousins to the Queen – who had been incarcerated since 1941 in the Royal Earlswood Asylum for Mental Defectives, at Redhill in Surrey.

Their last reported visitors were in the 1960s, and although it was an open secret at the Royal Earlswood, and in the local community, that the asylum housed close relatives of the Royal Family, to the wider world their existence had been obliterated.

Burke’s Peerage had declared them both to be long dead, on misinformation supplied by the family. In fact, Nerissa did not die until 1986, aged 66, and Katherine is still alive; at 85, she is the same age as the Queen.

Their shocking story came to light shortly after Nerissa’s death, when journalists discovered she was buried in a grave marked only by a plastic name-tag and a serial number.

The ensuing scandal, which prompted an anonymous source to provide a gravestone for Nerissa, made little difference to her sister’s life. Katherine received no visitors at the asylum, and as her aunt, the Queen Mother, lived on into cosseted old age, she did not possess even her own underwear – at least until her final years there – and had to dress from a communal wardrobe.

Now a Channel 4 documentary tells the story of the Queen’s hidden cousins, born in an era when children with learning disabilities were a family’s shameful secret.

Photographs of Katherine Bowes-Lyon show a distinct resemblance to the Queen, and Onelle Braithwaite says the sisters’ story was common knowledge when she arrived at the asylum as a 20-year-old nurse in the mid-1970s.

‘If the Queen or Queen Mum were ever on television, they’d curtsey – very regal, very low. Obviously there was some sort of memory. It was so sad. Just think of the life they might have had. They were two lovely sisters. They didn’t have any speech but they’d point and make noises, and when you knew them, you could understand what they were trying to say. Today they’d probably be given speech therapy and they’d communicate much better. They understood more than you’d think.’

Former ward sister Dot Penfold, now retired from nursing, also has fond memories. ‘They were no problem to look after but they were mischievous, like naughty children. Katherine was a scallywag. You could scream at her and she’d turn a deaf ear.’

Nerissa was born in 1919, and Katherine in 1926. Their father was John Bowes-Lyon, one of the Queen Mother’s older brothers and a son of the Earl of Strathmore. John died in 1930 and was survived, until
1966, by the girls’ mother, Fenella.

The sisters were unfortunate to have been born in an era when mental disability was seen as a threat to society and linked to promiscuity, feckless breeding and petty crime, the characteristics of the underclass; associations encouraged by popular belief in the science of eugenics, soon to be embraced by the Nazis.

‘So the belief was if you had a child with a learning disability, there was something in your family that was suspect and wrong,’ explains Jan Walmsley, the Open University’s professor in the history of learning disabilities.

For the Bowes-Lyons, this was a stigma that could threaten their social standing and taint the marital prospects of their other children. (Nerissa and Katherine’s beautiful and healthy sister Anne became a princess of Denmark by her second marriage; by her first marriage, she was Viscountess Anson and mother of the society photographer, the late Lord Lichfield.)

The imposing Royal Earlswood was the country’s first purpose-built asylum for people with learning disabilities. Nerissa and Katherine were 15 and 22 respectively when they were admitted. Nerissa’s medical records categorise her as ‘imbecile’. ‘She makes unintelligible noises all the time,’ stated a doctor. ‘Very affectionate… can say a few babyish words.’

Judy Wilkinson, 67, from Godalming, Surrey, recalls her apprehension when visiting the Royal Earlswood as a young girl in the 1950s, when her elder sister Nicola, who was brain-damaged at birth, was consigned there. ‘I’d get that gripping feeling of dread,’ Judy explains, and she remembers feeling puzzled that her sister was always wearing the same green coat, which never seemed to wear out.

Now she realises that the inmates wore their own clothes only if they had visitors. But for Nerissa and Katherine, there were few if any visitors. ‘I never saw anybody come,’ says Dot Penfold. ‘The impression I had was that they’d been forgotten.’

From the late 1960s, a wave of scandals exposed conditions in institutions that were severely understaffed and overcrowded. The Royal Earlswood was closed in 1997; at least one former nurse has alleged patients were abused. The grandiose building has since been converted into luxury apartments, while Katherine is believed to be living in a care home in Surrey. Her relationship with her family remains unchanged.

1 thought on “The Queen’s Hidden Cousins: Banished, Shuttered Into An Asylum In 1941 And Left Neglected – New Documentary Reveals All”