Millions of people died of starvation back then. Got food? 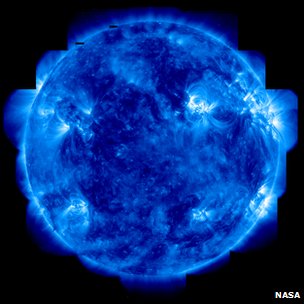 Recent cold winters that brought chaos to the UK and other places in northern Europe may have their roots in the Sun’s varying ultraviolet emissions.

A UK scientific team now shows in Nature Geoscience journal how these changes lead to warmer winters in some places and colder winters in others.

The researchers emphasise there is no impact on global warming.

The Sun has recently been in a quiet phase of its regular 11-year cycle, which co-incided with three years in which the UK, along with other places in northern Europe and parts of the US, experienced cold conditions unusual in the recent record.

But unusually warm weather was felt both further south, around the Mediterranean Sea, and further north in Canada and Greenland.

“The key point is that this effect is a change in the circulation, moving air from one place to another, which is why some places get cold and others get warm,” said Adam Scaife, one of the researchers on the paper, who heads the UK Met Office’s Seasonal to Decadal Prediction team.

“It’s a jigsaw puzzle, and when you average it up over the globe, there is no effect on global temperatures,” he told BBC News.

The recent revelations on the Sun’s ultraviolet variability come from a Nasa satellite called the SOlar Radiation and Climate Experiment (SORCE), launched in 2003.

Among its instruments is the Spectral Irradiance Monitor (SIM), which analyses the Sun’s output at frequencies in the infrared, visible and ultraviolet parts of the spectrum.

SIM is giving scientists a detailed picture of how the Sun’s ultraviolet emissions vary over its regular 11-year cycle of waxing and waning energy; and it suggests the UV variation is about five times larger than had been inferred from previous observations.

Meanwhile, scientists including the Met Office team have been publishing papers demonstrating that winter temperatures over Europe and North America do vary with the solar cycle – but without being able to show the mechanism.

The results of the modelling re-inforce the idea that the UV variations affect winter weather across the region; and they indicate how it may happen.

UV is absorbed in the stratosphere, the upper atmosphere, by ozone. So in the quiet bit of the solar cycle, when there is less UV to absorb, the stratosphere is relatively cooler.

The Hadley Centre model shows that the effects of this percolate down through the atmosphere, changing wind speeds, including the jet stream that circles the globe above Europe, North America and Russia.

The net change is a reduced air flow from west to east, which brings colder air to the UK and northern Europe and re-distributes temperatures across the region.

Dr Scaife emphasises that ultraviolet emissions are not the sole reason why winter temperatures vary.

“Assuming these new satellite data are correct… then as the 11-year solar cycle is predictable, it’s going to contribute some predictability for European and indeed UK weather,” he said.

The one big caveat is whether SIM’s data is accurate.

Scientists in the field appear to believe it is – but as the UV changes it sees are so large compared with previous methods, they would prefer confirmation.

Commenting in Nature Geoscience, Katja Matthes from the Helmholtz Centre in Potsdam, Germany, describes the results as “intriguing, albeit somewhat provisional”.

“The trends seen in the SIM observations are still under discussion and remain to be confirmed,” she writes.

She also points out that SIM measures only a proportion of the ultraviolet region of the spectrum.

If the ultraviolet theory is correct, the UK is less likely to see cold winters in the next few years as the 11-year solar cycle gains strength.

As well as the 11-year cycle, the Sun’s output also varies on longer timescales.

Its intensity has increased since the 1600s when the period known as the Maunder Minimum began, with astronomers documenting a dearth of sunspots over many decades.

Mike Lockwood of the UK’s Reading University, who also studies possible associations between solar changes and climate, suggested that if the Sun’s ultraviolet output varies as much on long timescales as its does across the solar cycle, that could provide the connection between the Maunder Minimum and the temperature changes.

(And millions of people died of starvation. Got food? – Infinite)

“We now have a viable explanation of why that happened – nothing to do with global warming, but in terms of temperature re-distribution around the north Atlantic.”