– Geithner: US To Play ‘Very Major Role’ In Helping Europe

If you’ve watched the video, then you know that this is only the beginning …

It’s the ultimate looting of the people!

What a nice fascist dictatorship! 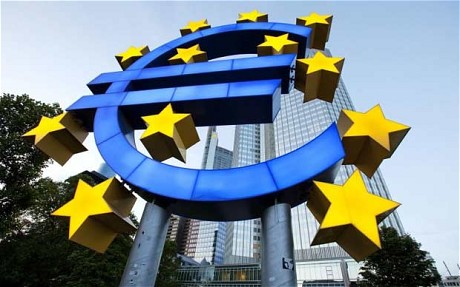 George Osborne has admitted for the first time that Britain may have to provide billions of pounds more to bail out the eurozone as part of €2 trillion international efforts to shore up the single currency bloc and revitalise the flagging global recovery.

G20 finance ministers, including the US Treasury Secretary Tim Geithner, agreed in Paris during the weekend that the International Monetary Fund (IMF) should consider using its resources to backstop a massive eurozone-led rescue effort. Under the terms of its membership, the UK will be liable for 4.2pc of any funds provided by the IMF. The IMF has $390bn available.

Britain has currently a maximum $20bn commitment to the IMF, and has pledged about £10bn to support the eurozone through the IMF and a bi-lateral loan to Ireland.

Germany and France are spearheading a multi-trillion dollar “shock and awe” programme expected to be agreed next weekend and presented the following week at the G20 summit in Cannes.

The international community may provide further support after the G20 agreed that the IMF should “consider new ways to provide on a case by case basis short-term liquidity to countries facing systemic shocks”. The IMF will report back on what measures it would offer at the summit in Cannes.

Britain and the US were keen to stress that unconventional IMF assistance should not be used as a substitute for a European plan. George Osborne said: “We have indicated our willingness to consider our position on resources for the IMF. Additional IMF resources must not be a substitute for the eurozone committing its resources to supporting its own currency.”

Pouring cold water on offers from the IMF’s emerging nation members to provide extra funding, Mr Geithner added: “The IMF has a substantial arsenal of financial resources and we would support further use of those existing resources to supplement a well-designed European strategy alongside a more substantial commitment of European resources.”

Oh, sure! – Christine Lagarde: IMF May Need A BAILOUT

He was speaking after what appeared to be significant progress in Europe’s attempts to ring-fence the sovereign debt crisis around Greece. Germany and France have now agreed the principles of a €2 trillion to €3 trillion rescue plan. Mr Osborne said they had just seven days to come up with “something quite impressive”.

Details will be thrashed out this week but there now appears to be consensus around the core measures – to increase the firepower of the eurozone bail-out fund (EFSF) from €440bn to around €2 trillion, to recapitalise the banks with €100bn-€200bn, and to devise a credible programme for Greece, including losses for private sector creditors of as much as 50pc.

In addition, there will be a new push to boost competitiveness among weaker economies and longer-term proposals to tighten economic governance across the single currency bloc.

Indicating the progress made, the G20 communique spoke of “work to maximise the impact of the EFSF” and “decisively addressing the current challenges through a comprehensive plan”. Countries will also “ensure banks are adequately capitalised”, the statement said.

In his most supportive comments on Europe for weeks, Mr Geithner added: “When France and Germany agree on a plan together and decide to act, big things are possible. A central lesson of financial crises is that success requires the commitment of financial force greater than the foreseeable magnitude of financial pressures.

“They know the stakes are high. They have come to recognise that if you underdo it, it can be more expensive.”