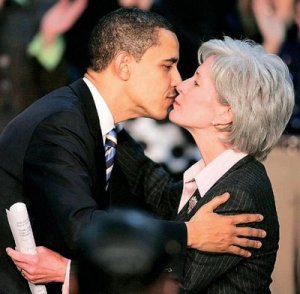 – Busted! Kathleen Sebelius admitts that she and Rick Perry are Bilderberg Group attendees!:

In violation of the Logan Act Kathleen Sebelius and Rick Perry (governor of Texas) attended a globalist, elite steering group (with the goal of global governement), the annual Bilderberg Group conference in 2007 meeting with foreign heads of state without the approval of congress. Other publications and journalists have also reported that Rick Perry is a Bilderberg Group attendee. Yet, so called patriots Palin and Beck continue to promote Rick Perry for governor instead of the constitutional/Tea Party candidate running against Rick Perry in the republican primary, Debra Medina. Can we still really believe that these highly paid usurpers are like us and have the best interest of the voters as their ultimate goal?

In case you can’t make it out first try, here is what was said. See if you can match it up.
Rishi Vyas: This question is for mrs Sebelieus. Uh the Kansas Daily confirmed that you were at the Bilderberg in 2007 and that you were on the list in 2008. uh yes or no question was that true? and if so what did yall talk about there?

Kathleen Sebelius: Um….Yes and Bilderbeg is a convening of European and American leaders from uh the economy and from political life and from uh the diplomatic(sumthing I couldn’t tell) who share conversation about everything from education initiative, climate change, uh mutual work together. Its gone on for 50 years and I was invited along w/ the govenor of aus, uh the govenor Rick Perry from texas and to comment on your question I did attend.