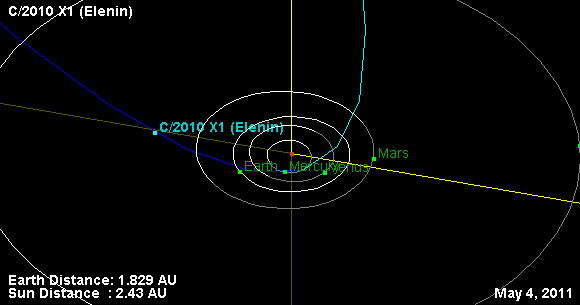 Often, comets are portrayed as harbingers of gloom and doom in movies and on television, but most pose no threat to Earth. Comet Elenin, the latest comet to visit our inner solar system, is no exception. Elenin will pass about 22 million miles (35 million kilometers) from Earth during its closest approach on Oct. 16, 2011.

Also known by its astronomical name C/2010 X1, the comet was first detected on Dec. 10, 2010 by Leonid Elenin, an observer in Lyubertsy, Russia, who made the discovery “remotely” using an observatory in New Mexico. At that time, Elenin was about 401 million miles (647 million kilometers) from Earth. Since its discovery, Comet Elenin has – as all comets do – closed the distance to Earth’s vicinity as it makes its way closer to perihelion, its closest point to the sun.

NASA scientists have taken time over the last several months to answer your questions. Compiled below are the some of the most popular questions, with answers from Don Yeomans of NASA’s Near-Earth Object Program Office at NASA’s Jet Propulsion Laboratory in Pasadena, Calif., and David Morrison of the NASA Astrobiology Institute at the NASA Ames Research Center in Moffett Field, Calif.

Most Popular Questions About Comet Elenin

When will Comet Elenin come closest to the Earth and appear the brightest?

Comet Elenin should be at its brightest shortly before the time of its closest approach to Earth on Oct. 16, 2011. At its closest point, it will be 22 million miles (35 million kilometers) from us.

Will Comet Elenin come close to the Earth or between the Earth and the moon?

Comet Elenin will not come closer to Earth than 22 million miles (35 million kilometers). That’s more than 90 times the distance to the moon.

Can this comet influence us from where it is, or where it will be in the future? Can this celestial object cause shifting of the tides or even tectonic plates here on Earth?

“Comet Elenin will not only be far away, it is also on the small side for comets,” said Yeomans. “And comets are not the most densely-packed objects out there. They usually have the density of something akin to loosely packed icy dirt.

“So you’ve got a modest-sized icy dirtball that is getting no closer than 35 million kilometers [about 22 million miles),” said Yeomans. “It will have an immeasurably minuscule influence on our planet. By comparison, my subcompact automobile exerts a greater influence on the ocean’s tides than comet Elenin ever will.”

I’ve heard about three days of darkness because of Comet Elenin. Will Elenin block out the sun for three days?

“As seen from the Earth, comet Elenin will not cross the sun’s face,” says Yeomans.

But even if it could cross the sun, which it can’t, astrobiologist David Morrison notes that comet Elenin is about 2-3 miles (3-5 kilometers) wide, while the sun is roughly 865,000 miles (1,392,082 kilometers) across. How could such a small object block the sun, which is such a large object?

Let’s think about an eclipse of the sun, which happens when the moon appears between the Earth and the sun. The moon is about 2,500 miles (4,000 kilometers) in diameter, and has the same apparent size as the sun when it is about 250,000 miles (400,000 kilometers) away — roughly 100 times its own diameter. For a comet with a diameter of about 2-3 miles (3-5 kilometers) to cover the sun it would have to be within 250 miles (400 kilometers), roughly the orbital altitude of the International Space Station. However, as stated above, this comet will come no closer to Earth than 22 million miles.

I’ve heard there is a “brown dwarf” theory about Comet Elenin. Would its mass be enough to pull Comet Honda’s trajectory a significant amount? Could this be used to determine the mass of Elenin?

Morrison says that there is no ‘brown dwarf theory’ of this comet. “A comet is nothing like a brown dwarf. You are correct that the way astronomers measure the mass of one object is by its gravitational effect on another, but comets are far too small to have a measureable influence on anything.”

If we had a black or brown dwarf in our outer solar system, I guess no one could see it, right?

“No, that’s not correct,” says Morrison. “If we had a brown dwarf star in the outer solar system, we could see it, detect its infrared energy and measure its perturbing effect on other objects. There is no brown dwarf in the solar system, otherwise we would have detected it. And there is no such thing as a black dwarf.”

Will Comet Elenin be visible to the naked eye when it’s closer to us? I missed Hale-Bopp’s passing, so I want to know if we’ll actually be able to see something in the sky when Elenin passes.

We don’t know yet if Comet Elenin will be visible to the naked eye. Morrison says, “At the rate it is going, seeing the comet at its best in early October will require binoculars and a very dark sky. Unfortunately, Elenin is no substitute for seeing comet Hale-Bopp, which was the brightest comet of the past several decades.”

“This comet may not put on a great show. Just as certainly, it will not cause any disruptions here on Earth. But, there is a cause to marvel,” said Yeomans. “This intrepid little traveler will offer astronomers a chance to study a relatively young comet that came here from well beyond our solar system’s planetary region. After a short while, it will be headed back out again, and we will not see or hear from Elenin for thousands of years. That’s pretty cool.”

This comet has been called ‘wimpy’ by NASA scientists. Why?

“We’re talking about how a comet looks as it safely flies past us,” said Yeomans of NASA’s Near-Earth Object Program Office. “Some cometary visitors arriving from beyond the planetary region – like Hale-Bopp in 1997 — have really lit up the night sky where you can see them easily with the naked eye as they safely transit the inner-solar system. But Elenin is trending toward the other end of the spectrum. You’ll probably need a good pair of binoculars, clear skies and a dark, secluded location to see it even on its brightest night.”

Why aren’t you talking more about Comet Elenin? If these things are small and nothing to worry about, why has there been no public info on Comet Elenin?

Comet Elenin hasn’t received much press precisely because it is small and faint. Several new comets are discovered each year, and you don’t normally hear about them either. The truth is that Elenin has received much more attention than it deserves due to a variety of Internet postings that are untrue. The information NASA has on Elenin is readily available on the Internet. (See http://www.jpl.nasa.gov/news/news.cfm?release=2011-135) If this comet were any danger to anyone, you would certainly know about it. For more information, visit NASA’s AsteroidWatch site at http://www.jpl.nasa.gov/asteroidwatch/.

I’ve heard NASA has observed Elenin many times more than other comets. Is this true, and is NASA playing this comet down?

NASA regularly detects, tracks and characterizes asteroids and comets passing relatively close to Earth using both ground- and space-based telescopes. The Near-Earth Object Observations Program, commonly called “Spaceguard,” discovers these objects, characterizes a subset of them and predicts their paths to determine if any could be potentially hazardous to our planet. For more information, visit the NASA-JPL Near Earth objects site at http://neo.jpl.nasa.gov/ .

However, neither NASA nor JPL is in the business of actively observing Elenin or any other comet. Most of the posted observations are made by amateur astronomers around the world. Since Elenin has had so much publicity, it naturally has attracted more observers.

I was looking at the orbital diagram of Comet Elenin on the JPL website, and I was wondering why the orbit shows some angles when zooming? If you pick any other comet, you can see that there are no angles or bends.

Many people are trying to plot the orbit of the comet with the routine on the JPL website, without realizing that this is just a simple visualization tool. While the tool has been recently improved to show smoother trajectories near the sun, it is not a scientific program to generate an accurate orbit. Yeomans explains that the orbit plotter on the Near-Earth Object website is not meant to accurately depict the true motion of objects over long time intervals, nor is it accurate during close planetary encounters. For more accurate long-term plotting, Yeomans suggests using the JPL Horizons system instead: http://ssd.jpl.nasa.gov/horizons.cgi?find_body=1&body_group=sb&sstr=C/2010%20X1 .