Fighting the Fed has reached a new stage: all out currency wars.

The Fed is desperate to tank the US dollar to stimulate exports and further fuel a stock market that is clearly back in bubble territory. However, central bankers in other countries have had enough.

Japan and Switzerland intervened heavily in the forex markets on Wednesday. Other countries, fed up with Fed policies and a weak dollar now threaten to do the same.

“We seem to be entering a new stage of the currency wars where it’s not just the emerging markets that are responding to broad dollar weakness,” said Callum Henderson, global head of currency research at Standard Chartered Plc in Singapore, who has written books on currency markets. “Expect much more intervention in the future and further acrimony in terms of how the U.S. dollar is doing.”

Here are some highlights from the article.

Asia-Pacific Equity Markets initially responded to the intervention in a positive manner. That action has now reversed. 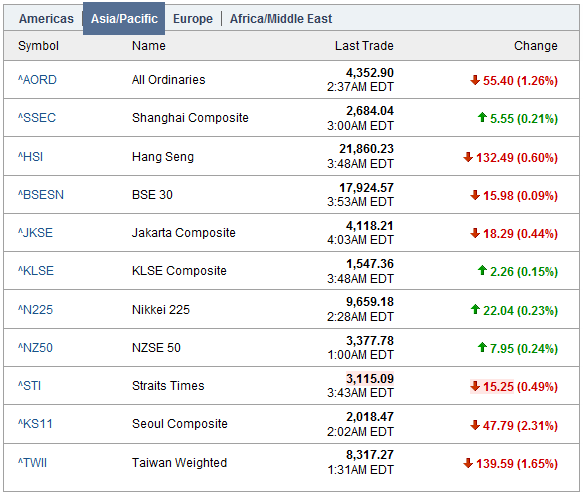 Australia, South Korea, and Taiwan are all down well over 1% each. Nothing is up by even .25%. US S&P 500 futures we up over 10 points but are now slightly red although Europe is slightly green.

At times like these, there is only one thing to do: Call out Tim Geithner for a reiteration of the “US Strong Dollar Policy”.