With its “humane gathering place”, “diversity carpet” and £280m cost it is perhaps apt that it has been heralded as the building that “houses the heart of Europe”. 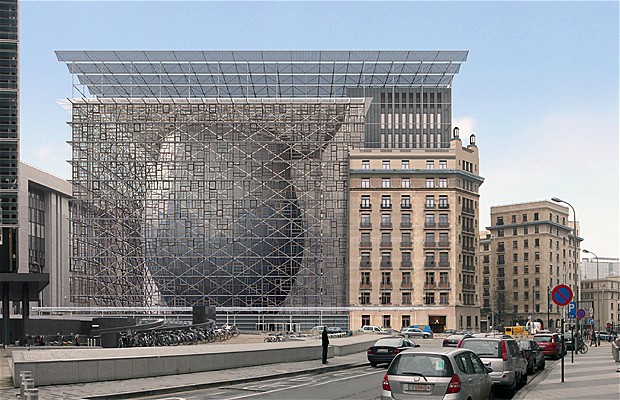 While Herman Van Rompuy, the EU president, has described his “Europa building” as a “jewel box”, David Cameron has been less enthusiastic dubbing it a “gilded cage”.

But perhaps even more unfortunate is the moniker the edifice, which will house Mr Van Rompuy’s presidential office and be home to future Brussels summits from 2014, has earned from EU officials.

Built as a state of the art glass and wood wing to an existing Art Deco building, the complex will be focused around a womblike central structure providing a home for summits and meetings of Brussels officials or diplomats.

And it this organic looking “urn” shape has already been nicknamed the “E-Uterus” by Council of the EU officials who will be working in the new building.

“It looks like a womb and, I am sure, many grand visions of Europe will be birthed from there,” quipped one official.

The building was unveiled to EU leaders by Mr Van Rompuy in a 14-page slick colour prospectus, produced at a cost of £100,000, when they sat down to a Brussels summit dinner on Thursday night formally dedicated to imposing a savage austerity programme on Greece.

Before discussing the Greek debt crisis that has threatened the existence of the euro, Mr Van Rompuy surprised EU leaders, who were tucking into a starter of scallops with artichoke vinaigrette, by trumpeting the venue, due to open in 2014, which will come complete with a “colourful woven carpet” to represent “European diversity”.

David Cameron, the Prime Minister, expressed his anger at the promotion of a grandiose Brussels project at a moment when EU leaders were supposed to be taking tough decisions that would lead to painful austerity measures imposed on millions of people.

“When you see a document being circulated, a great glossy brochure about some great new building for the European Council to sit in, it is immensely frustrating. You do wonder if these institutions get what every country, what every member of the public, is having to go through as we cut budgets and try make our finances add up,” he said.

“I do think it’s important as we do that that the politicians aren’t sitting in some gilded cage asking everyone else to take responsibility.”

Bill Cash, chairman of the House of Commons European Scrutiny Committee said: “We need an investigation into the extravagance and the cost of this Aladdin’s palace. It is a cross between the bonfire of the vanities and Kafka’s Castle.”

Over the last 14 years, EU leaders, ministers and diplomats have been meeting in a building called the Justus Lipsius which is regarded as too cramped and drab to represent a body that has grown from 15 member states to 27.

The complex of buildings will also house the offices of Mr Van Rompuy, the president of the European Council, a job created by the Lisbon Treaty.

Mr Cameron, who had dined the night before with other leaders on black cod with onion ragout washed down with a 2009 Sancerre wine, said that he regretted that the decision, taken seven years ago, to build a new EU venue could not be reversed.

“I’ve only been to this building seven times in the last year but it seems to me to be to do a perfectly good job. The microphones work, there is plenty of room and the food isn’t bad either,” he said.

With almost 27,000 sq metres of floor space, the new edifice is the latest development in a burgeoning post-Lisbon Treaty euro quarter in Brussels.

It will be a new environmentally friendly addition to the existing Residence Palace, built in the 1920s to houses luxury apartments for officials, commercial offices, a private theatre, swimming pool and restaurants.

The palace was requisitioned in 1940 as the headquarters of the German army during the Nazi occupation of Belgium during the Second World War.

Emma Boon of the TaxPayers’ Alliance said: “We’re cutting back at home and we can’t afford more ludicrous spending by Eurocrats. This is yet more evidence that we shouldn’t hand any more money to Europe, they’re already wasting the millions we give them each day.”