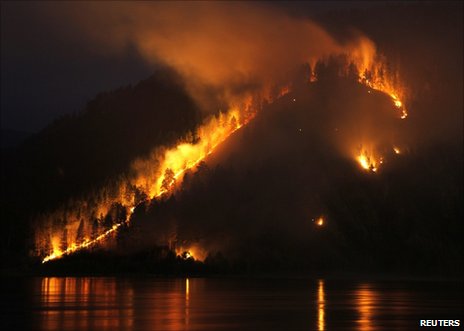 So far the fires are confined to eastern Russia

The fires were mainly confined to remote parts of Siberia and the Urals, with no blazes reported near Moscow and other central Russian cities.

But the area on fire is twice the size of that for the same period last year.

Drought, fires and smog left dozens dead and ruined crops in 2010, and there are fears of a repeat disaster.

The emergencies ministry said in a report on its website that the biggest fires were in the Sakha Republic (Yakutia), the Amur region and the Krasnoyarsk territory.

More than 6,000 personnel equipped with more than 1,140 units of fire-fighting equipment were deployed against the fires, backed by 42 aircraft.

Of the 421 fires reported on Monday, 241 were extinguished, the ministry said.

Western Russia, the centre of the country’s grain production, remains largely unaffected by fire, but officials say the situation may deteriorate if dry weather persists.

Meanwhile, drought conditions have been hitting grain crops in northern Europe, with some forecasters predicting above-average temperatures for the summer months.