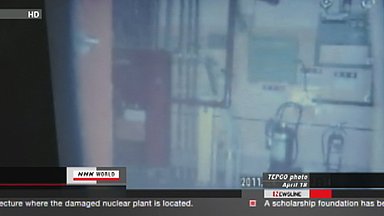 Workers have entered the No.2 reactor building at the Fukushima Daiichi nuclear plant for the first time since an explosion there on March 15th.

The Tokyo Electric Power Company, or TEPCO, sent 4 workers into the building on Wednesday morning to check radiation levels and other conditions.

The utility says data on radiation levels in the building are necessary to proceed with a revised plan the firm announced on Tuesday to circulate water leaked from containment vessels back into reactors as coolant.

The utility plans to begin operating an air cooling system at the reactor possibly this month, to lower the temperature in a pool for spent nuclear fuel that’s believed to be one source of the steam.

Tokyo Electric senior official Junichi Matsumoto said steam is building up in the facility because its roof remains intact, unlike the plant’s No.1 and 3 units. He said the steam could be reduced by cooling the pool.