– TEPCO Admits ‘Reactor Rupture’: ‘There Must Be A Large Leak’ In Reactor No. 1 – Similar Ruptures In No. 2 And No. 3 Reactors Possible

– Fukushima Reactor No. 1: Water Level ‘More Than 5 Meters Below The Top Of The Fuel Rods’ And ‘Unmeasurable’, TEPCO To Cover Building With Synthetic Cloth To Prevent Radioactive Materials From Further Escaping Into The Atmosphere

– New MIT Study: Chain Reactions Must Have Been Burning At The Damaged Fukushima Nuclear Reactors Long After The Disaster Unfolded

One of the reactors at the crippled Fukushima Daiichi power plant did suffer a nuclear meltdown, Japanese officials admitted for the first time today, describing a pool of molten fuel at the bottom of the reactor’s containment vessel. 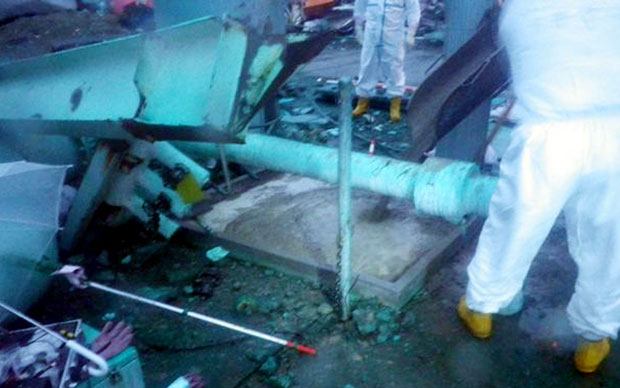 Engineers from the Tokyo Electric Power company (Tepco) entered the No.1 reactor at the end of last week for the first time and saw the top five feet or so of the core’s 13ft-long fuel rods had been exposed to the air and melted down.

Previously, Tepco believed that the core of the reactor was submerged in enough water to keep it stable and that only 55 per cent of the core had been damaged.

Now the company is worried that the molten pool of radioactive fuel may have burned a hole through the bottom of the containment vessel, causing water to leak.

“We will have to revise our plans,” said Junichi Matsumoto, a spokesman for Tepco. “We cannot deny the possibility that a hole in the pressure vessel caused water to leak”.

Tepco has not clarified what other barriers there are to stop radioactive fuel leaking if the steel containment vessel has been breached. Greenpeace said the situation could escalate rapidly if “the lava melts through the vessel”.

However, an initial plan to flood the entire reactor core with water to keep its temperature from rising has now been abandoned because it might exacerbate the leak. Tepco said there was enough water at the bottom of the vessel to keep both the puddle of melted fuel and the remaining fuel rods cool.

Greenpeace said significant amounts of radioactive material had been released into the sea and that samples of seaweed taken from as far as 40 miles of the Fukushima plant had been found to contain radiation well above legal limits. Of the 22 samples tested, ten were contaminated with five times the legal limit of iodine 131 and 20 times of caesium 137.

Seaweed is a huge part of the Japanese diet and the average household almost 7lbs a year. Greenpeace’s warning came as fishermen prepared to start the harvest of this season’s seaweed on May 20.

Inland from the plant, there has been a huge cull of the livestock left inside the 18-mile mandatory exclusion zone with thousands of cows, horses and pigs being destroyed and some 260,000 chickens from the town of Minamisoma alone. The Environment ministry has announced, however, that it will attempt to rescue the thousands of pets that were left behind when residents were ordered to evacuate. At least 5,800 dogs were owned by the residents of the zone, although it is unclear how many remain alive, two months after the earthquake struck.