May 03 — Today SNAP released the most recent food stamp numbers. Not surprisingly, we just saw another all time high 44.2 million poverty-level Americans relying on government funding for day to day sustenance. Granted the number appears to be plateauing, so all those who bought the change if not the ho[y]pe, can rejoice as it may start declining next month: a development that is sure to be herald for Obama a 4th Putin-esque term. That said, another number that has to be kept in perspective and for which we have to thank none other than Pauly-K is that offsetting these 44.2 million of impoverished Americans who can get a tax refund for writing off the American dream, are 400 Americans who accounted for 10%, or $91 billion of total, in capital gains taxes, or said otherwise, 400 US taxpayers account for 10% of all capital gains in 2007! We are currently going through old issues of Pravda to see if the Communist empire ever achieved this kind of social disparity between the nomenklatura and the proletariat (it didn’t). If we find confirmation we will post it, and lose a sizable bet which will certainly deny us any possibility of every being among the above mentioned 400. 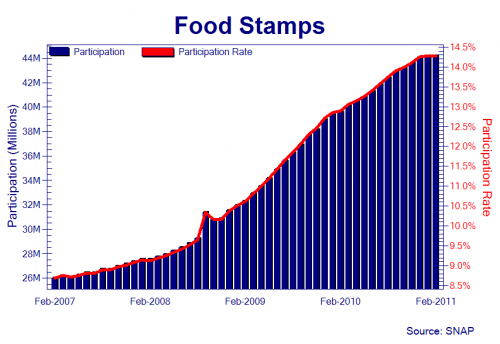 One of the more interesting documents published by the IRS is its report on the income and taxes of the top 400 taxpayers (pdf). A lot of attention gets focused, rightly, on the remarkably low average tax rate these people pay — less than 17 percent in 2007, the lowest on record. But I was struck by something else: in several years during the last decade the top 400 accounted for more than 10 percent of all capital gains income in America. Just 400 people!

Visually, this is presented below: of the $907 billion in capital gains paid in 2007, only 400 taxpayers accounted for $91 billion:

That’s right ladies and gents, 400 US citizens are the primary beneficiaries of the Weimar rally so insiduously orchestrated by Chairsatan Benzebub. Or, in other words, 44.2 million to 400. And now you know that “democracy” can withstand even odds worse than 100k to 1.