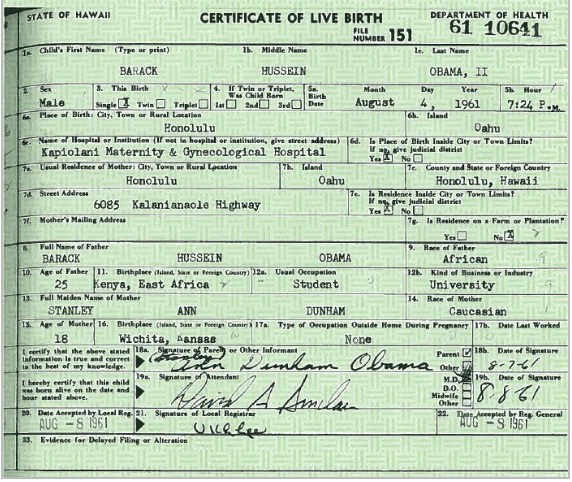 From intelligence agencies around the world, the verdict on President Obama’s newly-released certificate of live birth from Hawaii is in: the certificate is a rank forgery on the same level as the Niger “yellow cake” uranium and Iraq Oil Ministry forged documents. Intelligence and law enforcement services are experts on fake documents since they have to deal with large numbers of counterfeit documents, such as birth certificates, passports, identity cards and driver’s licenses, as well as currency. Intelligence agencies are also experts at forging their own documents for their clandestine agents.

Within 24-hours of the release of the long form Certificate of Live Birth on April 27, intelligence agencies from Britain and China to Germany and Russia examined the document and concluded it was a forgery based on the fact that Barack H. Obama Sr.’s race, listed as “African,” was a monumental error, considering that not only the United States, but other English-speaking nations described Africans and those of African descent as either “Negroes” or “blacks” in 1961.

Intelligence experts point out that “African” is a major clue indicating a forgery.

In 1961, the U.S. Department of Health, Education, and Welfare classified non-Whites, who were not Asian, Eskimo, Aleut, Hawaiian, part-Hawaiian, or other “non-White,” as “Negro.” The U.S. Census Bureau also used the term “Asian and other Pacific Islander” in 1961, which included Filipino, Hawaiian, and part-Hawaiian. The Census Bureau, like HEW, used the term “Negro” to describe blacks and those of black descent. The term “mulatto,” used to describe those of mixed white and black ancestry, ceased being used by the U.S. Census Bureau in 1918.

Births in the United States in 1961 are classified for vital statistics into white, Negro, American Indian, Chinese, Japanese, Aleut, Eskimo, Hawaiian and Part-Hawaiian (combined), and “other nonwhite.”

The category “white” includes, in addition to persons reported as “white,” those reported as Mexican or Puerto Rican. With one exception, a reported mixture of Negro with any other race is included in the Negro group; other mixed parentage is classified according to the race of the nonwhite parent and mixtures of nonwhite races to the race of the father. The exception refers to a mixture of Hawaiian and any other race, which is classified as Part-Hawaiian. In most tables a less detailed classification of “white” and “nonwhite” is used.

In the United Kingdom, the terms “black” and “Asian” were used in the 1961 census to describe those who were “non-white British” nationals. Barack Obama, Sr., as a citizen of the British Colony of Kenya, would have known that his British racial designation was “black” in 1961. The term “African” was not used as a racial designation in either the colony of Kenya or on the British mainland. In South Africa and other British colonies in Africa, “Coloured” was used to describe those of mixed white-black descent.

The consensus among intelligence agency experts is that the Obama long form Certificate of Live Birth was hastily manufactured by an amateur who never thought of using the standard race designation of Negro in Barack Obama, Sr.’s racial designation block on the form either due to ignorance or an attempt to be politically correct in 2011 by refusing to use an accepted term from 1961.

The past decade has seen the use of crude forgeries to propel the United States into a war in Iraq (the bogus Niger “yellow cake” uranium documents) and to try to indict various U.S. and foreign politicians and businessmen (the fake Iraq Oil Ministry “Oil-for-Food” documents). The Obama forged Certificate of Live Birth represents yet another attempt to perpetuate a fraud on a grand scale.