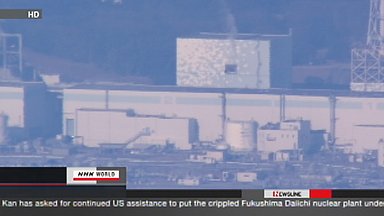 At the Fukushima Daiichi nuclear plant, high levels of radiation have kept workers from approaching the buildings housing the first 3 reactors, which lost their cooling functions in the March 11th earthquake and tsunami.

On Friday, the highest radiation level measured outside the double-entry doors of the Number 1 to 3 reactor buildings was 2 to 4 millisieverts per hour.

But issues remain as radioactive water has been found in turbine buildings and the utility tunnel outside the reactors.

At the Number 2 reactor, the level of highly contaminated water in the tunnel is still rising. To prevent overflow, TEPCO is stepping up the inspection of the nuclear waste processing facility, to which it aims to transfer contaminated water.

Underground water at the plant is also contaminated.
On Wednesday, the level of radioactive substances sharply increased at facilities where underground water from the Number 1 and 2 reactors is collected.

On Friday, workers kept on monitoring the situation.
They say the level of radioactive substances has stabilized or decreased in every reactor from 1 to 6.

So they say it’s unlikely that highly radioactive water is still seeping into underground water.