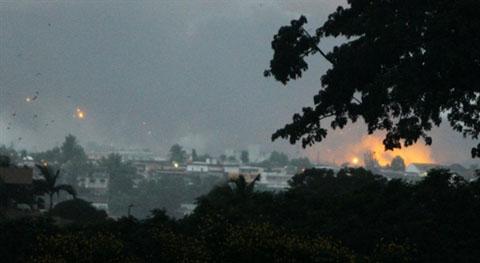 Mr Gbagbo’s presidential palace and residence were hit, along with military camps used by pro-Gbagbo forces, in what UN chief Ban Ki-moon said was a mission of self-defence.

French troops and United Nations peacekeepers are joining the fight against Ivory Coast’s incumbent president as forces backing the country’s internationally-recognized leader launch another attack against his positions in the commercial capital, Abidjan.

Witnesses in Ivory Coast are reporting that U.N. helicopters have fired four missiles at a military base in Abidjan, the country’s former capital. The U.N. is trying to stop President Laurent Gbagbo’s forces from using weapons to hit civilians. The missiles were fired on a pro-Gbagbo military camp housing three battalions of the Ivorian army. The international body has no air force, leaving a full-blown offensive like the one in Libya out of the question. However, it does have a Ukrainian aviation unit with three Mi-24 attack helicopters that have been deployed in Ivory Coast. The U.N.’s focus is on heavy weapons, including BM-21 rocket systems, which Gbagbo loyalists are using on civilians. Ivory Coast’s brewing conflict is between its two presidents, Gbagbo and Alassane Ouattara, the internationally recognized election winner. Nonetheless, Gbagbo’s forces are targeting U.N. officers and residents of Abidjan.

Over the weekend, the U.N. evacuated 170 civilian staff from Abidjan. Choi Young-jin, the U.N.’s top diplomat in Ivory Coast, told the BBC that Gbagbo had cut off the water to U.N. headquarters where workers were now hiding in the bunker to avoid sniper fire. The U.N.’s 9,000 troops don’t have the power to try to oust Gbagbo. They are, however, permitted to respond to heavy weapons attacks against the U.N. or civilians and have deployed a Ukrainian aviation unit with three attack helicopters. Choi said other action was planned.

“We are now in a way under siege, so we cannot go out freely, [they’re] targeting us with snipers, it’s a deliberate shoot at United Nations.

UN helicopters have attacked president Laurent Gbagbo’s forces in Ivory Coast, destroying them at four places where they had been shelling civilians, a UN spokesman said.

The helicopters fired four missiles at a Gbagbo military camp in the main city of Abidjan, witnesses told Reuters. “We saw two UN MI-24 helicopters fire missiles on the Akouedo military camp. There was a massive explosion and we can still see the smoke,” one said. The camp is home to three battalions of the Ivorian army.