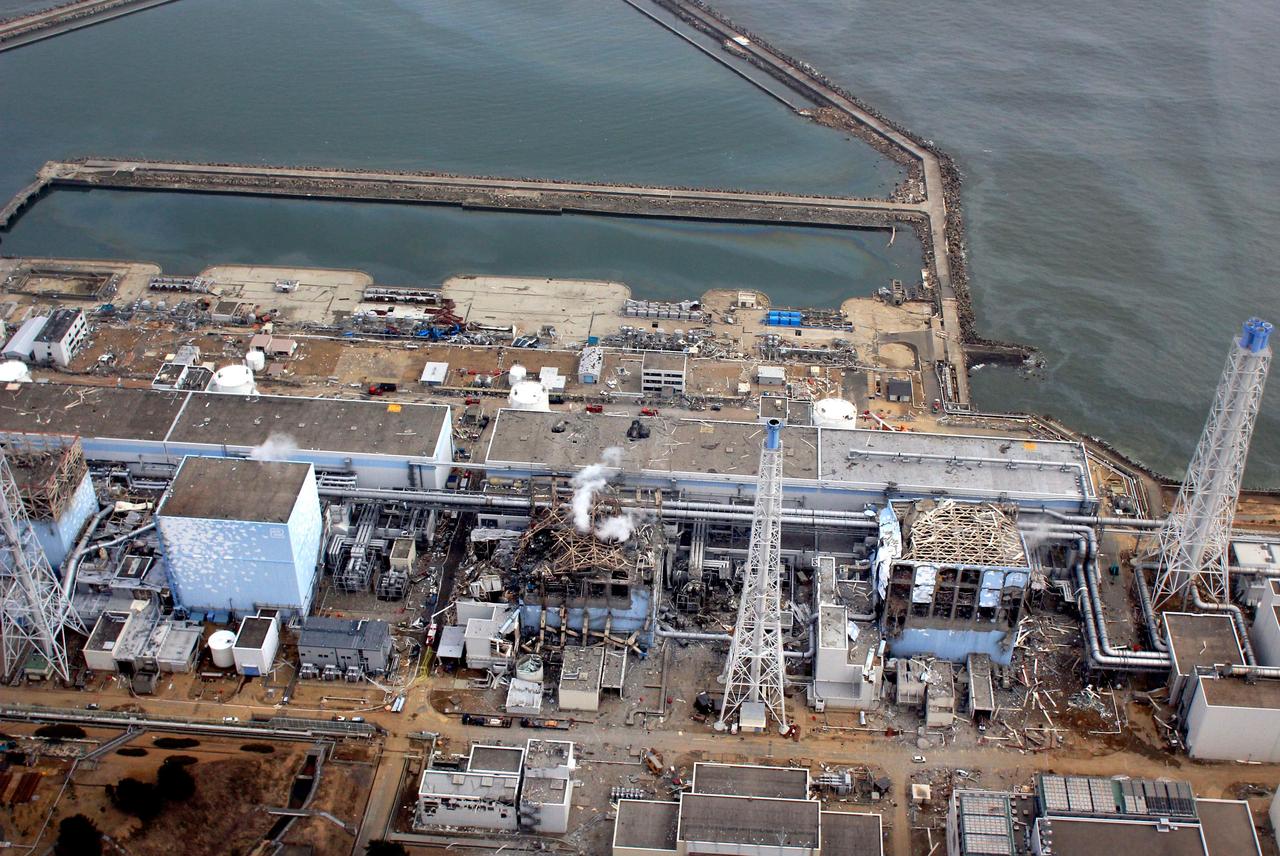 High levels of radioactive iodine-131 have been recorded in the Pacific off the crippled Fukushima nuclear plant. (AFP: Air Photo Service) (Click on image to enlarge.)

A nuclear expert has warned that it might be 100 years before melting fuel rods can be safely removed from Japan’s Fukushima nuclear plant. …

“As the water leaks out, you keep on pouring water in, so this leak will go on for ever,” said Dr John Price, a former member of the Safety Policy Unit at the UK’s National Nuclear Corporation.

“There has to be some way of dealing with it. The water is connecting in tunnels and concrete-lined pits at the moment and the question is whether they can pump it back.

“The final thing is that the reactors will have to be closed and the fuel removed, and that is 50 to 100 years away.

(NaturalNews) The unfolding of the Fukushima catastrophe continues to worsen. Here are today’s most important developments:

• A nuclear expert is now warning that it will take 50 to 100 years before the spent nuclear rods at Fukushima will cool enough to be removed from the site. In the mean time, Japan must keep pouring water on the fuel, and that creates highly radioactive water that’s being flushed directly into the ocean. So now we’re looking at the possibility of a century-long radiation leak (http://www.abc.net.au/news/stories/…).

• The groundwater underneath the Fukushima nuclear power facility is now showing 10,000 times the level of radiation normally allowed by government authorities. This is from iodine-131 measured at 15 meters below one of the reactors. (http://www.cbsnews.com/stories/2011…)

• You’ve probably already heard that there have been efforts to use robots to help solve the Fukushima crisis, but those efforts have failed. Then again, who needs robots when you can just pay humans to do the same deadly work? Reuters is now reporting that a U.S. recruiting company is signing up U.S. workers to go to Fukushima and work on-site there as part of the crew that’s trying to save the reactors (http://ca.news.yahoo.com/exclusive-…). Why would anyone agree to do such a thing? Because they’re being promised extra pay, if you can believe that.

You gotta wonder, of course, how these people think they’re going to be able to spend all that extra money if they’re half-dead from radiation poisoning. But hey, if they get paid one dollar for every millirem of radiation they absorb, they could soon be Fukushima’s new millionaires!

• The world’s largest concrete pumping truck is headed to Japan as part of a plan that can only be the beginning of the total surrender of Fukushima (http://chronicle.augusta.com/latest…). The only reason you need to pump that much concrete is if you’re building a giant Chernobyl-like entombment of the Fukushima facility. But who’s going to keep spraying the spent nuclear fuel rods with water in the mean time? (Nobody knows…)

• Due to the failure of Fukushima, Tokyo will be experiencing rolling blackouts all summer long. Tokyo’s power has been reduced by roughly 20 percent due to the Fukushima catastrophe (http://edition.cnn.com/2011/WORLD/a…).

• Fukushima workers who have been desperately trying to bring the reactors back under control have said they expect to die due to their repeated exposure to extremely high levels of radiation. Oh, but the Fukushima deniers claim radiation is safe and that no one has even been harmed by it! (Seriously…) (http://www.telegraph.co.uk/news/wor…)

• Remember, health authorities have been screaming for decades that sunlight exposure is potentially deadly because of the radiation exposure. But Fukushima fallout, we’re now told, is perfectly safe for you! I guess only the sun is dangerous, not nuclear fuel rod meltdowns. How’s that for public health policy?

Check NaturalNews.com for even more daily reporting on the developing situation with Fukushima.