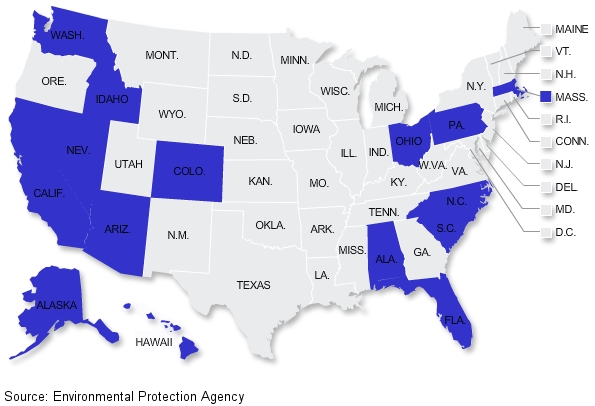 At least 15 states have found trace amounts of radiation from the crippled nuclear plant in Japan, but officials say the levels of radioactivity are much too low to prompt health concerns.

Very low concentrations of iodine-131 were found last week in a rainwater sample in Boston. “It is not a problem for public safety nor is it a threat to the drinking water supply,” said Massachusetts Energy and Environmental Affairs Secretary Richard Sullivan.

Sullivan ordered the collection of drinking water samples from 12 locations Sunday. Tests showed the water was “absolutely clean,” he said.

No radiation has been discovered in Virginia, but state Health Commissioner Karen Remley said she asked that routine quarterly monitoring be conducted this week instead of next week as scheduled. “I am not worried,” she said.

The Environmental Protection Agency said Monday that its nationwide air monitoring system found “slightly higher” radiation levels in some locations than last week but said they are “still far below levels of public health concern.”

The March 11 earthquake and tsunami in Japan damaged the Fukushima Dai-ichi power plant, prompting radioactive emissions that have been dispersed by weather systems.

Iodine-131 ordinarily is not found in Nevada and can be linked to Japan because of its half-life, said Ted Hartwell, manager of environmental monitoring at Nevada’s Desert Research Institute.

Iodine-131 “has a very short half-life of about eight days, so we know it’s from a fairly recent event,” he said. Half-life is the length of time it takes a radioactive substance to decrease in potency by half.

• Aubrey Godwin, director of the Arizona Radiation Regulatory Agency, said he was not surprised when two sensors 50 miles apart detected trace amounts of radioactive material. “We saw the same thing after Chernobyl,” the 1986 nuclear disaster in the former Soviet Union, he said. “It shouldn’t be concerning to Arizonans,” he said.

• Case Western Reserve University geology professor Gerald Matisoff said Monday that he found trace amounts of iodine-131 in rainwater he collected from the roof of a campus building in Cleveland for an unrelated study.

Sullivan isn’t surprised radiation made its way to Massachusetts. “The world,” he said, “sometimes is a small place.”