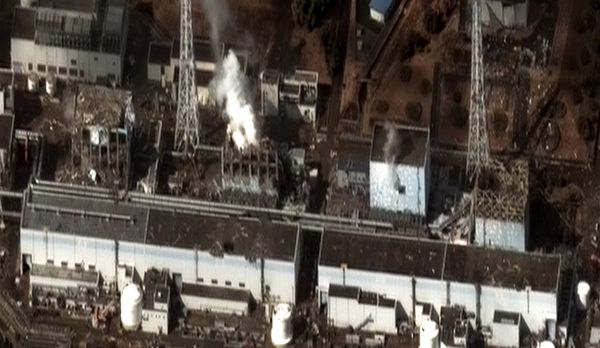 Mar. 23 — (Bloomberg) — One of the reactors in the crippled Fukushima nuclear plant may have been relying on flawed steel to hold the radiation in its core, according to an engineer who helped build its containment vessel four decades ago.

Mitsuhiko Tanaka says he helped conceal a manufacturing defect in the $250 million steel vessel installed at the Fukushima Dai-Ichi No. 4 reactor while working for a unit of Hitachi Ltd. (6501) in 1974. The reactor, which Tanaka has called a “time bomb,” was shut for maintenance when the March 11 earthquake triggered a 7-meter (23-foot) tsunami that disabled cooling systems at the plant, leading to explosions and radiation leaks.

“Who knows what would have happened if that reactor had been running?” Tanaka, who turned his back on the nuclear industry after the Chernobyl disaster, said in an interview last week. “I have no idea if it could withstand an earthquake like this. It’s got a faulty reactor inside.”

Tanaka’s allegations, which he says he brought to the attention of Japan’s Trade Ministry in 1988 and chronicled in a book two years later called “Why Nuclear Power is Dangerous,” have resurfaced after Japan’s worst nuclear accident on record. The No. 4 reactor was hit by explosions and a fire that spread from adjacent units as the crisis deepened.

Hitachi spokesman Yuichi Izumisawa said the company met with Tanaka in 1988 to discuss the work he did to fix a dent in the vessel and concluded there was no safety problem. “We have not revised our view since then,” Izumisawa said.

Kenta Takahashi, an official at the Trade Ministry’s Nuclear and Industrial Safety Agency, said he couldn’t confirm whether the agency’s predecessor, the Agency for Natural Resources and Energy, had conducted an investigation into Tanaka’s claims. Naoki Tsunoda, a spokesman at Tokyo Electric Power Co., which owns the plant, said he couldn’t immediately comment.

Tanaka, who said he led the team that built the steel vessel, was at his apartment on Tokyo’s outskirts when Japan’s biggest earthquake on record struck off the coast on March 11, shaking buildings in the nation’s capital.

“I grabbed my wife and we just hugged,” he said. “I thought this is it: we’re dead.”

For Tanaka, the nightmare intensified the next day when a series of explosions were triggered next to the reactor that he helped build. Since then, the risks of radioactive leaks increased as workers have struggled to bring the plant under control.

Tanaka says the reactor pressure vessel inside Fukushima’s unit No. 4 was damaged at a Babcock-Hitachi foundry in Kure City, in Hiroshima prefecture, during the last step of a manufacturing process that took 2 1/2 years and cost tens of millions of dollars. If the mistake had been discovered, the company might have been bankrupted, he said.

Inside a blast furnace the size of a small airplane hanger the reactor pressure vessel was being treated one last time to remove welding stress. The cylinder, 20 meters tall and 6 meters in diameter, was heated to more than 600 degrees Celsius (1,112 degrees Fahrenheit), a temperature that softens metal.

Braces that were supposed to have been placed inside during the blasting were either forgotten or fell over when the cylinder was wheeled into the furnace. After the vessel cooled, workers found that its walls had warped, Tanaka said.

The vessel had sagged so that its height and width differed by more than 34 millimeters, meaning it should have been scrapped, according to nuclear regulations. Rather than sacrifice years of work and risk the company’s survival, Tanaka’s boss asked him to reshape the vessel so that no-one would know it had ever been damaged. Tanaka had been working as an engineer for the company’s nuclear reactor division and was known for his programming skills.

“I saved the company billions of yen,” said Tanaka, who says he was paid a 3 million yen bonus and presented with a certificate acknowledging his “extraordinary” effort. “At the time, I felt like a hero,” he said.

Over the course of a month, Tanaka said he made a dozen nighttime trips to an International Business Machines Corp. office 20 kilometers away in Hiroshima where he used a super- computer to devise a repair.

Meanwhile, workers covered the damaged vessel with a sheet, Tanaka said. When Tokyo Electric sent a representative to check on their progress, Hitachi distracted him by wining and dining him, according to Tanaka. Rather than inspecting the part, they spent the day playing golf and soaking in a hot spring, he said.

“The guy wouldn’t have known what he was looking at anyway,” Tanaka said. “The people at the utility have no idea how the parts are made.”

After a month of computer modeling, Tanaka came up with a way to use pumpjacks to pop out the sunken wall. While it would look like nothing had ever happened, no-one knew what the effect of the repair would have on the integrity of the vessel. Thirty- six years later, that reactor pressure vessel is the key defense protecting the core of Fukushima’s No. 4 reactor.

“These procedures, as they’re described, are far from ideal, especially for a component as critical as this,” Robert Ritchie, Professor of Materials Science & Engineering at the University of California of Berkeley, said in a phone interview. “Depending on the extent of vessel’s deformation, it could possibly lead to local cracking in some of its welds.”

Tanaka quit Babcock-Hitachi in 1977, when he was 34 years old and became a writer. A graduate of Tokyo Institute of Technology, his Japanese-language books include “Options in Complex Systems: Natural Science and Economics on the Edge of Chaos,” and a book for young adults called, “How do we Know the Earth is Moving?”

After the meltdown at Chernobyl in 1986, Tanaka was asked to narrate a Russian movie documenting the disaster. A team of Soviet filmmakers had taken 30 hours of footage inside the plant, getting very close to the ruptured core. The movie’s director died of radiation poisoning about a year after the filming. While watching the footage, Tanaka had a breakdown.

“All of a sudden I was sobbing and I started to think about what I’d done,” Tanaka said. “I was thinking, ‘I could be the father of a Japanese Chernobyl.’”

Two years later Tanaka says he went to the Trade Ministry to report the cover-up he’d been involved in more than a decade earlier. The government refused to investigate and Hitachi denied his accusations, he said.

“They said, if Hitachi says they didn’t do it, then there’s no problem,” Tanaka said. “Companies don’t always tell the truth.”