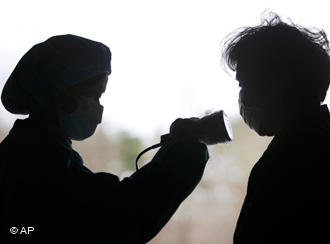 Evacuees from the area are being screened for radiation levels

Higher-than-normal radiation was detected in a sample of seawater taken near Japan’s damaged nuclear plant. Officials sought to calm fears, saying there was no threat to human health.

A sample of water taken from the Pacific Ocean near Japan’s stricken Fukushima nuclear power plant has raised fears over the danger posed by heightened radiation levels.

The Tokyo Electric Power Company (TEPCO) said the level of radioactive iodine found in the sample was 126.7 times higher than the government-set limit, while the level of caesium was 24.8 times higher. The sample was taken on Monday about 100 meters (320 feet) south of the Fuhkushima No. 1 plant.

However, TEPCO officials played down the risk to human health.

“It would have to be drunk for a whole year in order to accumulate to one millisievert,” a TEPCO official told reporters in Tokyo. Under guidlines set out by the International Atomic Energy Agency (IAEA), that is the recommended maximum radiation level per person per year.

An incident earlier on Monday also did little to ease global fears. Workers were evacuated after gray smoke was seen rising from reactor No. 3, which is among the most badly damaged at the six-reactor complex, a plant spokesman said.

The workers had only been pulled out of the immediate area around the reactor and not from the whole plant, he said.

“Due to this problem, the operator temporarily pulled out the workers, while checking on the condition of the site,” the spokesman said.

The smoke ceased shortly afterwards, but smoke was then observed rising from reactor No. 2.

The workers are repeatedly enduring high doses of radiation as they continue to try to avert a nuclear disaster which could harm millions of people. An earthquake and resulting tsunami on March 11 knocked out the reactor’s power supply and cooling systems, threatening a nuclear meltdown.

Thirteen Japanese military trucks spent about one and a half hours in the morning spraying 90 tons of water over the spent fuel pond of reactor No. 4, with some success.

Engineers at the facility were also racing to fix disabled cooling systems and restore power. All six earthquake-damaged reactors are connected to a power supply, but only one pump had been activated.

The smoke at the reactor came as fresh reports surfaced that locally produced spinach and milk had been contaminated by radiation.

According to Governor Masaru Hashimoto of Ibaraki Prefecture, the radiation posed no health risks, but he also told farmers to refrain “voluntarily” from shipping spinach.

The Japanese government has ordered a halt to all shipments of spinach from four prefectures surrounding the plant and has also banned milk shipments from the site’s home province of Fukushima.

Chief Cabinet Secretary Yukio Edano announced the measures at a briefing amid increasing concerns over contamination of some foods and tap water with trace amounts of radioactivity.

But “even if you eat and drink them several times it will not be a health hazard. So I would like you to act calmly,” Yukio Edano said during a news conference.

The World Health Organization (WHO) said on Monday that the risk of radiation in food had so far been underestimated.

“It’s a lot more serious than anybody thought in the early days when we thought that this kind of problem can be limited to 20 to 30 kilometers,” Peter Cordingley, Manila-based spokesman for the WHO’s regional office for the Western Pacific, told Reuters.

“It’s safe to suppose that some contaminated produce got out of the contamination zone,” he added.

The head of the United Nations nuclear watchdog, who made a short visit to Japan to assess the situation last week, rejected criticism of what some saw as its slow response to the crisis.

Speaking at a meeting of the IAEA’s board of governors in Vienna on Monday, Director General Yukiya Amano said the body played only an advisory role, with the actually responsibility for safety lying with its member states.

At the same time though, he said the crisis in Japan showed the need for the IAEA’s role to be reassessed.

“It was designed largely in the wake of the Chernobyl disaster in 1986, before the information revolution,” he said. “It reflects the realities of the 1980s, not of the 21st century.”