The nuclear power plant workers known as the ‘Fukushima Fifty’ have been isolated from their families to prevent news of difficult conditions leaking out, it was claimed. 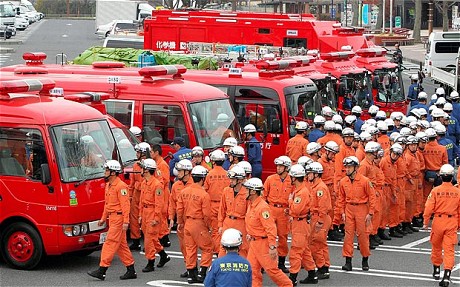 A family friend of one of the workers – the team battling to control the crisis at the power plant – said that email and phone access had been cut and one man had been unable to speak to his wife for days.

The move comes after one of the Fifty texted his wife in Japan saying that drinking water at the plant was running low, adding: “I feel like I’m coming down with something.”

Fukushima workers interviewed by The Sunday Telegraph at a special evacuation centre in the city of Koriyama said they had lost confidence in the management of the plant.

“We were told that safety was a top priority,” said one staff member, who asked to remain anonymous. “We went through simulations of what to do in an emergency, but we never thought it would be as bad as this. I don’t want to go back there.”

The majority of the plant’s 1,800 workforce was evacuated last week after a series of explosions vented radioactivity harmful to human health into the atmosphere. But a skeleton team of around 50 workers at any one time – about 180 in total, with shifts and rotations – is fighting a desperate rearguard action to stop catastrophic reactor meltdowns.

A next-door neighbour of one of the Fifty, from Tomiokamachi, said: “His wife told me that since the first day, when the reactor blew up, she has not had contact with her husband because inside the power plant they shut out phone reception.

“She says now that no news is good news, and she has to believe that her husband is alive and working inside. She just hopes he has not been injured or damaged for life.”

Tepco, the operator of the Fukushima plant, is keeping a close eye on the Koriyama evacuation centre, about 25 miles west of the stricken station and on the fringes of the Japanese government’s radiation exclusion zone.

Though the centre is open to all evacuees from the radiation-affected area, a very high proportion of those sleeping there are connected with Tepco and the power station. A Tepco official attempted to discourage The Sunday Telegraph from conducting interviews at the centre on Saturday.

It is understood that some of the Fifty themselves have been sleeping at the centre, but they appeared to have been moved out.

It has also been reported that some of the workers have a hard time swallowing the stored biscuits and packs of cooked rice with which they are being fed.

Japanese television quoted the daughter of a Fukushima worker as saying: “My father is still working at the plant – they are running out of food. We think conditions are really tough. He says he’s accepted his fate. Much like a death sentence.”

“It was such a powerful jolt I could hardly stand. I was thrown from side to side,” the contractor told the newspaper. “The lights went out and emergency lighting came on. Water began pouring out of burst metal pipes in the ceiling.”

The workers – and the families – know that the danger they are in. The Fifty breathe through uncomfortable respirators or carry heavy oxygen tanks on their backs and at all times must wear masks, goggles and protective suits whose seams are sealed off with duct tape to prevent radioactive particles from creeping in.

But according to experts some forms of radiation can penetrate any gear and, at the very least, the workers face an increased risk of cancer and shortened life.

Five of their colleagues have already been killed and more injured. One worker was taken to hospital after suddenly grasping his chest and finding himself unable to stand, and another needed treatment after receiving a blast of radiation near a damaged reactor.

Their task has been to douse the reactors with water to prevent a meltdown while desperately trying to restore a cooling system that might stabilise the reactors.

It is likely that the site is now so contaminated that it has become difficult for them to work near the reactors for extended periods of time. Industry experts suggest that when dealing with a task in a highly radioactive area of the plant, workers might line up and handle the task only for minutes at a time before passing off to a colleague.

Radiation levels in the control room of one of the reactors are said to be so high that staff cannot remain in there for long, so must continually go in and out to carry out tasks.

Some of the Fifty, whose identities are being protected by company officials, are understood to be volunteers. One is said to be a 59-year-old from Shimane prefecture, in western Japan, working at a different plant and just six months from retirement.

His daughter said he had told her: “The future of nuclear power operations depends on how this is handled. I want to go there with a sense of mission.”

A girl wrote on the Twitter website: “My dad went to the nuclear plant, I’ve never seen my mother cry so hard. People at the plant are struggling, sacrificing themselves to protect you. Please dad come back alive.”

The apparent stoicism of the Fifty in the face of such odds has won admiration around not just in Japan, with its culture steeped in memories of noble self-sacrifice, but around the world.

From many of the plant workers who have been evacuated there is a sense of guilt. A relative of the worker who was removed from the facility on Tuesday said the employee had been torn between a sense of duty and a wish to be with their family.

The relative quoted the evacuated worker saying: “I thought I would never meet you again. But I also feel bad about walking away alone.”

By Andrew Gilligan, Robert Mendick and Nikki Kininmonth in Koriyama 12:01AM GMT 19 Mar 2011