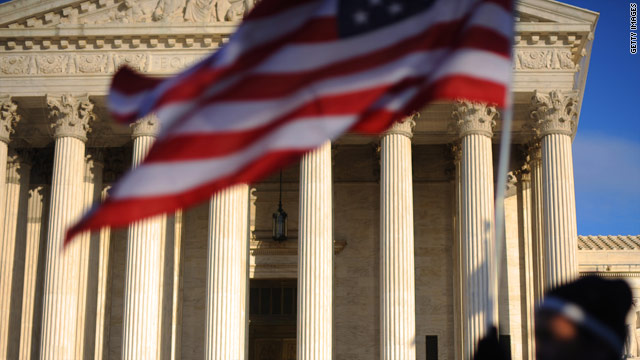 Washington (CNN) – The Supreme Court has again rejected an appeal from a “birther” proponent questioning the citizenship of President Barack Obama.

The justices Monday turned aside without comment a request for a rehearing of various claims, after dismissing the original appeal in late January.

The long-shot petition by Gregory Hollister had called on Justices Sonia Sotomayor and Elena Kagan to withdraw from considering the constitutional claims, contending a conflict of interest by the president’s two high court appointees.

The justices had also dismissed earlier, unrelated lawsuits from individuals questioning Obama’s citizenship. State birth certificate records show (Where are these records???) he was born August 4, 1961, in Honolulu, Hawaii. His mother is a native of Kansas; his father was born in Kenya.

Among the claims of various “birther” movement organizers are that the president was born in Kenya or Indonesia; that his birth certificate is a forgery; and that he had dual American-British citizenship at birth because of his father’s Kenyan heritage and therefore is not a “natural born” citizen, as is required to be eligible for president under the U.S. Constitution.

The grass-roots legal issue has gained little legal or political footing, but continues to persist in the courts.

The Obama administration did not file, and the high court did not demand, a formal government response to this latest legal claim from Hollister, who said in his appeal he is a retired U.S. Air Force colonel.

The high court will often insist the Justice Department weigh in with its views on a particular constitutional issue, or when a top government official or agency is being sued, a strong sign the justices would be seriously considering accepting the appeal.

Obama and his staff produced copies of his birth certificate when he was running for president in 2008, and have previously dismissed questions over his citizenship.

The respondent in the case was labeled as “Barry Soetoro,” the name Hollister said Obama used when he was a child living in Indonesia with his family. The case is Hollister v. Soetoro (10-678).

The largest support for the idea he was definitely or probably not born in the United States was among Republicans, at 41%, compared with Independents, at 29%, and Democrats, at 15%. The sampling error for that breakdown was plus or minus 5.5 percentage points.