Davis was giving nuclear bomb material to Al-CIAda, there is no Al-Qaeda:

A US intelligence agent arrested after shooting dead two men was the acting head of the CIA in Pakistan and had been gathering intelligence for drone attacks, according to intelligence sources. 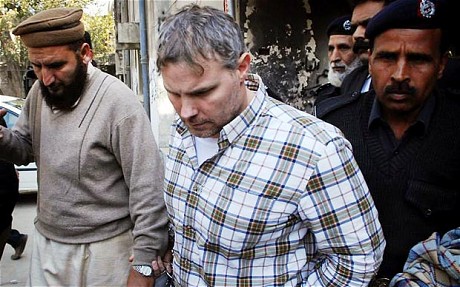 Raymond Davis has been held for almost a month in a Lahore prison while a court decides his status Photo: REUTERS

Raymond Davis, a 36-year-old former special forces soldier, had taken command after the CIA station chief’s cover was blown, according to reports.

American officials insist he is entitled to diplomatic immunity and that he be released immediately.

Davis has been held for almost a month in a Lahore prison while a court decides his status.

The case has provoked a surge in anti-American hostility and spawned a wave of conspiracy theories.

Many Pakistanis have questioned whether Davis was really the victim of an attempted robbery – as he told police – and exactly why he was driving around Lahore with a Glock handgun in a rented car.

On Tuesday The Nation newspaper, which has close links to Pakistan’s military establishment, claimed one of his main tasks was to keep the CIA network intact in the tribal agencies, where al-Qaeda-linked militants maintain bases, and that he was familiar with their local languages.

Pakistan authorities say they recovered items including a make-up kit, long-range radio, a GPRS system and a camera containing photographs of sensitive locations.

Telephone records suggest he was in contact with Lashkar-e-Jhangvi and the Pakistan Taliban in South Waziristan.

Even Pakistan’s spies say they had no idea what Davis was doing in Lahore.

A senior intelligence source told The Daily Telegraph he was unknown to Pakistan’s Inter-Services Intelligence directorate and was operating outside the normal agreements between the two countries.

“We want the US to come clean on what exactly he was up to,” he said.

American officials initially said Mr Davis worked for the US consulate in Lahore before claiming he worked for the embassy in Islamabad, and was entitled to full immunity.

However, The New York Times on Monday reported that Davis was part of a CIA operation tracking Islamist extremists in eastern Pakistan, such as Lashkar-e-Taiba, the virulently anti-Indian group blamed for the bloody 2008 siege of Mumbai.

Opposition politicians and relatives of Davis’s victims said the government should address suspicions that he also worked for Xe, a US security firm formerly known as Blackwater.

“Davis deserves no pardon … We knew from day one that he was working for the CIA and Blackwater,” said Mohammad Waseem, brother of Mohammad Faheem.