Statins do no only cause depression:

70% of US drinking water is already fluoridated.

Here is the history of fluoride:

Warning: Don’t read this before going to sleep! 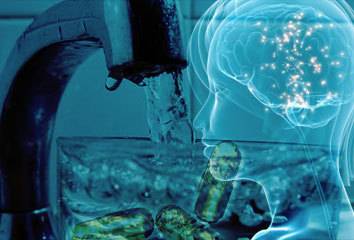 As if flouride and hexavalent chromium in public water supplies aren’t bad enough, health authorities are now pushing for the addition of drug statins as well. Drug companies claim that statins will lower cholesterol and prevent heart attacks and strokes, but researchers have proven that the drugs only benefit a quarter of people taking them. There are some very troubling side-effects, especially if there is no history of heart problems.

A new study by the Cochrane Library is highlighted in the following article. Their review of statin trials found symptoms of “short-term memory loss, depression and mood swings,” that were purposely minimized by the drug companies funding the research. Statins have also been linked to a greater risk of liver dysfunction, acute kidney failure, cataracts and muscle damage.

The pharmaceutical companies’ powers are overflowing; we can actually see their influence trickling into federal health administration, down into municipalities, and flushing into our local water treatment centers

Health authorities are pushing for drugs to be added to public water supplies that cause depression and memory loss, as a new study shows that the dangers of statins have been deliberately underplayed by drug companies, in a chilling throwback to how the population in Aldous Huxley’s Brave New World were mass medicated with Soma to keep them docile and easy to control.

Statins are taken by tens of millions of people worldwide, a boon for drug companies like Merck, whose chief executive Henry Gadsden back in 1975 dreamed of being able to sell a drug to people who had no immediately identifiable illness, or as Mike Adams writes, “They needed a way to sell drugs to healthy people.” Statins were born and the financial windfall for Big Pharma quickly followed.

Drug companies claim that statins have been proven to lower cholesterol and help prevent heart disease and strokes, leading many health experts to insist that they be artificially added to public water supplies, but dangerous side-effects buried by drug companies conducting statin trials have now come to light, in addition to the fact that “for three quarters of those taking them, they offer little or no value.”

A new study published in the Cochrane Library, which reviews drug trials, examined data from 14 drugs trials involving 34,000 patients and found evidence of “short-term memory loss, depression and mood swings,” that had been deliberately underplayed by the drug companies funding the research.

The researchers warn that, “Statins should only be prescribed to those with heart disease, or who have suffered the condition in the past. Researchers warn that unless a patient is at high risk of suffering a heart attack or stroke, statins may cause more harm than good.”

However, despite the fact that statins have also been linked to a greater risk of liver dysfunction, acute kidney failure, cataracts and muscle damage, health authorities have been pushing for the drug to be added to public water supplies as part of a mass medication program that is not only illegal without consent, but also threatens a plethora of unknown consequences.

Only last week, George Lundberg, MD, the editor of MedPageToday, which is a mouthpiece for the American Medical Association, wrote an op-ed entitled, Should We Put Statins in the Water Supply?

In May 2008, renowned cardiologist Professor Mahendra Varma called for statins to be artificially added to drinking water.

Putting statins in the water supply was also considered during a November 2008 discussionwhich featured Robert Bonow, M.D., of Northwestern University in Chicago, Gordon F. Tomaselli, M.D., of Johns Hopkins University in Baltimore, and Anthony De Maria, M.D., of the University of California at San Diego.

Also in November 2008, CNBC aired a segment lauding the effectiveness of statins, after which one of the hosts remarked, “Why don’t they just put statins in the water supply,” to which CNBC’s medical expert replied, “A lot of people have said that and they are in the water in fact.”

The idea of adding drugs to the water supply to biochemically manipulate the thoughts and emotions of populations has gone from the realm of science fiction in Aldous Huxley’s Brave New World, where people were mass medicated with Soma to keep them docile and easy to control, to an imminent reality.

Indeed, during a March 20, 1962 Berkeley University speech, Huxley spoke of how humans would be made to “love their servitude” via the state-sponsored introduction of mind-altering drugs.

“There will be, in the next generation or so, a pharmacological method of making people love their servitude, and producing dictatorship without tears, so to speak, producing a kind of painless concentration camp for entire societies, so that people will in fact have their liberties taken away from them, but will rather enjoy it, because they will be distracted from any desire to rebel by propaganda or brainwashing, or brainwashing enhanced by pharmacological methods. And this seems to be the final revolution,” said Huxley.

In a 2008 paper titled, “Fluoride and the Future: Population Level Cognitive Enhancement,” Oxford professor Julian Savulescu explored how populations of the future could be mass-medicated through pharmacological “cognitive enhancements” added to the water supply.

In December 2009, we reported on how Japanese health authorities were considering adding trace amounts of lithium to public water supplies as a “mood stabilizer” in a bid to lower the suicide rate. Fox News medical expert Dr. Archelle Georgiou gave the concept tacit approval when she labeled the study an “interesting concept” and refused to even mention the moral aspects of mass drugging people against their will.

Of course, a huge number of Americans are already being mass medicated against their will, from which one of a myriad of debilitating health effects includes lowered IQ and increased docility. Indeed, as Joseph Borkin documented in his book The Crime and Punishment of I.G. Farben, the first occurrence of artificially fluoridated drinking water on Earth was found in Germany’s Nazi prison camps. The Nazis explained that the reason for mass-medicating water with sodium fluoride was to sterilize women and coerce the victims of their concentration camps into calm submission.