The deficit on goods rose to £9.2bn in December, from £8.5bn in November, according to the latest data from the Office for National Statistics 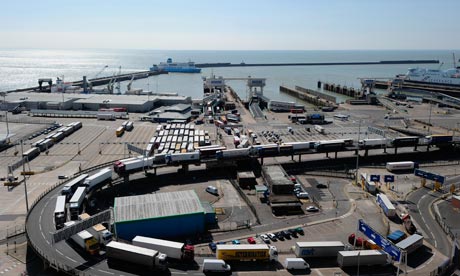 Hopes of an export-led recovery in Britain’s fragile economy remain bleak, according to official figures which showed that the trade deficit hit a record high of £9.2bn in December.

Exporters delivered their best performance since 1977 over last year as a whole, with foreign sales of UK products expanding by 17%; but their efforts were swamped by a larger rise in imports, according to the Office for National Statistics.

The dismal trade figures were released as the business secretary, Vince Cable, delivered a white paper promising help to small and medium-sized companies to take advantage of the cheap pound and lucrative markets in India and China.

The goods deficit was up by £700m, from £8.5bn in November, the ONS said, underlining the challenge facing Cable and his colleagues as they battle to “rebalance” the economy.

Britain’s services sector, including the resurgent banks, ran up a surplus of £4.4bn in December, but that was not enough to offset the £9.2bn shortfall in goods, and the overall monthly trade deficit, of £4.8bn, was the highest for five years.

Economists said the snow in December may have had some effect, but Britain’s underlying trade performance remained weak. “The big picture is still that the external sector is not giving the economy the support it needs to weather the fiscal squeeze,” said Vicky Redwood, UK economist at Capital Economics.

Lee Hopley, chief economist at manufacturers’ organisation the EEF, said the strong export performance last year – including a 44% increase in car exports, for example – provided some cause for optimism. “Manufacturing continues to take advantage of the buoyancy in export demand and capitalise on growth in world markets, though the continued strength of imports is denting the contribution to growth from net trade,” she said.

Exporters have complained in the past that they fail to win overseas contracts because they lack credit guarantees and insurance offered by the UK’s competitors. Cable said the white paper, outlining the government’s plans to promote trade and investment, offered exporters comfort that a wider range of credit facilities would soon be on offer.

However, he rejected pleas to match the direct government support offered by the German and French governments, insisting that the poor state of the government’s finances meant firms must rely on the private sector to provide credit insurance.

Last year the British Chamber of Commerce called for an overhaul of credit insurance after it said the failure of the banks to offer cover had cost the UK billions of pounds in lost contracts.

The Exports Credit Guarantees Department, which was set up in the early 1990s to co-ordinate credit cover, will launch the Export Working Capital Scheme later this year for those not eligible for the Export EFG, offering export finance worth over £1m.

Green said: “The Government will offer an expanded, better-coordinated range of products to large and small businesses alike, working closely with the banks to widen access to the capital and credit insurance exporters need to make the most of their opportunities.

Shadow business secretary John Denham welcomed the announcement, but warned that without a wider strategy for restoring the economy to health, measures to boost trade were unlikely to succeed. “Putting new tyres on the car won’t improve the performance if you don’t fix the engine,” he said.

The ONS revealed a list of Britain’s top trading partners during 2010, which revealed how dependent the economy remains on its traditional markets. Top of the list as buyers of British goods were the US, Germany, the Netherlands, France and Ireland – none of them among the group of fast-growing economies Cable would like British firms to target. Germany and China were the largest sources of UK imports.