For all those conspiracy theorists out there, 2012 just got a little more ominous. As required by legislation passed this last summer, Russia will adopt a universal ID card starting next year. The Universal Electronic Card (UEC) is intended to eventually replace all local, regional, and national forms of ID, providing a central database through which Russians can access everything from medical insurance to ATMs. According to the official website, the UEC will be adopted by around 1000 national and regional services along with about 10,000 commercial enterprises. The mayor of Moscow has already declared it will be able to handle public transportation there, and we can expect similar adoptions throughout the nation. Will all Russians be carrying a single form of ID that is their only passport to all public and private services? Looks like it. A similar project has started in India, and there are experiments for related concepts in Mexico. Universal ID is starting to catch on around the globe. Where will it spread to next?

Ostensibly, the UEC is designed to push the Russian ID system into the 21st century. Not only is the card to provide a way for citizens to easily make electronic purchases (in person and online) it is supposed to cut down on fraud. While it doesn’t seem to include any biometrics, the card has other security measures. All information (whether for public or commercial use) will be stored in a database, not on the card. The UEC will have a number, a ‘passcode’, that points the user to the appropriate record in the database. It’s unclear what kind of readers (RF, magnetic strip, etc) will be able to access the UEC, but the site says that at least one (perhaps the only one ) will be contactless. For financial transactions users will be able to set predefined limits so that the card can only withdraw a restricted amount of funds over a period of time. Each use of the UEC will require the entry of a personal identification number, and get this, everyone will be granted a fake PIN as well! If someone is coercing you into using your UEC, then enter the fake PIN. Authorities will be notified surreptitiously while the transaction appears to be continuing regularly. I’m sure we can think of a dozen ways to get around that, but still, pretty cloak and dagger there, Russia. 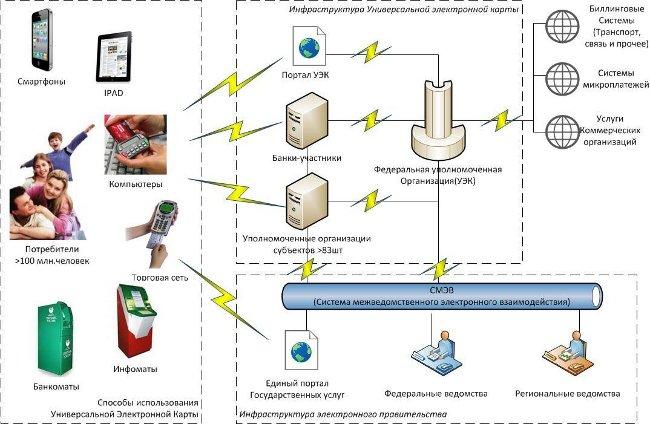 Examples of how the UEC will work. Translations welcome.

Starting in 2012, Russians will be able to carry the UEC and start connecting it to their bank accounts, credit cards, bus passes, etc. Due to the legal mandate most of the businesses and all of the local/regional/national services will be required to accept it. Convenient, yes. Potentially disastrous? Maybe so, but Russia’s not going to be alone in this. India is adopting a universal ID for national identity, and is going to encourage public institutions and commercial enterprises to accept it. That UID, however, will contain some pretty thorough biometrics. Programs in Mexico (powered by a company in the US) will experiment with iris-based identification for public and commercial purposes, albeit on a smaller scale. Universal ID, especially those with advanced security features, seem to be a rising trend on the global stage.

There are some real benefits here. Convenience, certainly. Many Russians simply don’t have a way to make a secure purchase online, and their public system is a warren of overlapping ID cards that require an equally tangled bureaucracy. Properly set up, a UID tied into bank accounts could help you keep track of purchases and manage finances with greater accuracy. Security could also improve, but I think that any such system (even those that employ biometrics) are at best a short step ahead of criminal ingenuity.

I don’t think you have to be a conspiracy nut to notice the dangers either. With a single ID, agencies will be able to track personal activity more precisely. That could mean catching terrorists through financial detective work, but it could also mean a large scale invasion of privacy. Not sure if this is just old Cold War prejudice talking here, but I think Russia’s reputation makes that possibility seem likely.

In any case, whether or not Russia’s UEC proves to be a boon or bane to its citizens, it is certainly coming. And soon. The more often we see universal ID adoption, the more I believe that some form of that technology is going to spread to every industrialized nation around the world. Government or private issue, service or commercial orientated, biometrically enhanced or not – UID is on the rise. Whatever problems or advantages that may cause, we best prepare for them now.

2 thoughts on “Russia To Adopt Universal ID Card in 2012”