Good to have ‘friends’: 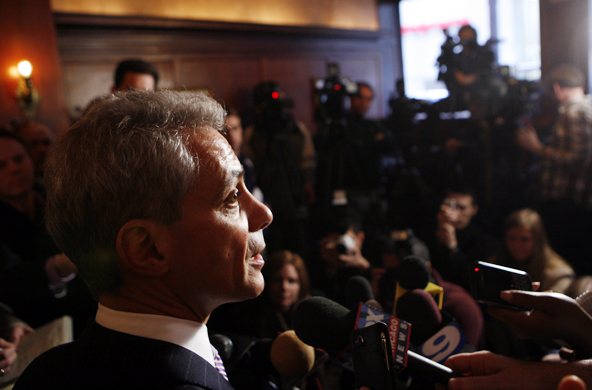 Rahm Emanuel has been knocked off the mayoral ballot after an Illinois appellate court panel overturned a ruling in his residency case.

The panel ruled that Emanuel did not meet the residency requirement for eligible candidates. (Scroll down to read the complete ruling.)

“We conclude that the candidate neither meets the the municipal code’s requirement that he have ‘resided’ in Chicago for the year preceding the election in which he seeks to participate nor falls within any exception to the requirement,” the court wrote in its decision.

Shortly afterward, Emanuel’s attorneys said they will appeal the case to the Illinois Supreme Court.

Ballots for the Feb. 22 election will be printed Monday night and they will not contain Emanuel’s name, said Jim Allen, a spokesman for the Chicago Board of Election Commissioners.

“We’re going to print with one less candidate,” Allen said.

Emanuel had been in the top position on the ballot. That spot now goes to City Clerk Miguel del Valle, followed by Carol Moseley Braun, Gery Chico, Patricia Van Pelt-Watkins and William Walls.

The board, Allen said, is not worried about the possibility that the Illinois Supreme Court could pick up the case.

“It’s a hypothetical,” Allen said. “We’ve got an election to run.”

Emanuel struck a confident note when he addressed reporters around 1:30 p.m. at a Loop restaurant.

In a news conference that lasted barely four minutes, Emanuel said he hoped for a quick ruling on his appeal to the state Supreme Court and added that he felt encouraged by the arguments from the justice who took his side in the 2-1 appellate court ruling.

“The dissent came in pretty strong,” he said.

Emanuel repeated his contention that he should not be disqualified from running because he went to work in Washington. He suggested that he should be exempt from the requirement that he live in the city for a year before the election — a loophole that clearly applies to soldiers on duty.

“When the president asks you to serve the country as his chief of staff, that counts as part of service to your country,” he said.

Emanuel said he hopes that his residency issue will be resolved, arguing that it has distracted from a clear debate on important issues facing the city, including its financial problems, public education and crime.

“I still own a home here – look forward to moving into it one day – vote from here and pay property taxes here,” Emanuel said. “I do believe the people of the city of Chicago deserve the right to make a decision on who they want to be their next mayor.”

Michael Kasper, Emanuel’s lead attorney, told reporters after the decision that he plans on filing paperwork with the Illinois Supreme Court by Wednesday. Kasper said he’s not sure whether the court will even take up the case.

“I’m not going to speculate on what the court may or may not do,” Kasper said. “But we are going to appeal.”

Burton Odelson, an attorney for the objectors, thanked the judges for their decision.

“It was a clear cut case just like we said all along” Odelson told reporters at the courthouse.

In the 2-to-1 court decision, judges Thomas Hoffman and Shelvin Louise Marie Hall agreed that Emanuel does not meet the eligibility requirements to run for mayor. Emanuel’s attorneys had argued that Emanuel’s work as White House chief of staff made him eligible for a special provision in the election code that’s typically applied for U.S. servicemen and women. That provision allows those serving to maintain their residency if they are “on business of the United States.”

“That plan language limits the reach of the ‘business of the United States’ exception to ‘elector[s]’ or their spouses; it makes no mention of ‘candidates,’” wrote Hoffman for the majority.

Judge Bertina Lampkin, the lone dissenter, ripped into the majority’s decision. Calling the decision “contrary,” Lampkin wrote in the dissenting opinion that multiple court precedents show Emanuel can be eligible to run for mayor even though he worked in Washington, D.C. for most of the last year. Lampkin also wrote Emanuel’s decision to vote from his Hermitage Avenue address while in D.C. showed the candidate did not intend to abandon his residency.

Lampkin also casted doubt on whether the Illinois Supreme Court will have time to review the case, should it do so.

“While I strongly believe that the majority’s holding is completely erroneous, if the majority were to apply it only prospectively, rather than retroactively to this candidate, there would be sufficient time for our supreme court to thoughtfully review it,” wrote Lampkin. “The majority’s decision disenfranchises not just this particular candidate, but every voter in Chicago who would consider voting for him. Well-settled law does not countenance such a result.”

One of the seven justices on the state’s high court is Anne M. Burke, the wife of veteran Ald. Edward Burke (14th Ward). The Chicago News Cooperative reported in November that Burke’s political organization has aided the campaign of Emanuel’s mayoral rival, Gery Chico.

Chico would not address Burke’s potential role Monday at a news conference scheduled in response to the ruling.

“I’m a candidate for mayor, I don’t tell the Illinois Supreme Court what to do one way or the another,” Chico said. “That’s not my position.”

The Emanuel campaign encouraged followers on Twitter to meet at the Chicago Board of Elections at 5 p.m. today “to rally for Rahm’s right 2 b on the ballot and let Chicagoans choose.”

If Emanuel ultimately cannot be a candidate for mayor, the development would revolutionize the campaign to replace retiring Mayor Richard M. Daley. Emanuel has been the clear leader in every poll, with many analysts speculating that he could win the majority in the Feb. 22 election and avoid an April run-off.

Emanuel reported last week that his campaign raised a record-breaking sum of more than $10.5 million in the first three months after he resigned as White House chief of staff and returned to Chicago. That amount represented more than four times the fund-raising performance of Chico and roughly three times what the five other candidates on the ballot had collected.

Emanuel’s fund-raising prowess had allowed him to saturate the airwaves with campaign commercials for more than two months.

Chico said he was “surprised as anyone” with the ruling and called himself “agnostic” about Emanuel’s removal from the ballot.

“We will continue vigorously with our campaign with or without Rahm Emanuel,” Chico said at a River North news conference. “I’ve said from day one in this campaign, I haven’t paid much attention to who’s on, who’s off, who’s in the race. I mean, some of the biggest names in politics have come before this race and I’ve just not paid much attention to it and my philosophy remains the same today: we will work hard to gather every vote that we can and bring our case to the people throughout this city.”

Del Valle took a swipe at Emanuel’s substantial fundraising totals in a statement about the ruling.

“It looked like money was going to decide this election,” del Valle said. “The voters now have a rare opportunity to shape this city’s future.”

Braun called the appellate court’s decision a “major milestone” in her campaign and said she hoped Emanuel’s supporters would now join her.

“I’m a great believer in the rule of law,” Braun said at a Monday afternoon news conference. “The court has spoken and until they change their mind that’s the law of the land.”

U.S Rep. Danny Davis, who had filed nominating papers to appear on the Feb. 22 ballot and had been declared the consensus black mayoral candidate by a group black politicians and community leaders, said he has no regrets about withdrawing from the race last month and endorsing Braun.

“I don’t worry about spilled milk,” Davis said Monday from Washington, D.C.. He said has been receiving calls from his colleagues in Congress about the ruling. “Everybody’s been talking about it. … I’ve talked to very few people who were not surprised.”

The appellate panel’s ruling was the latest twist in an unusual spectacle that has consumed much of the political limelight since Daley announced that he would not run for a seventh term and Emanuel launched his campaign to succeed Daley.

City elections officials and a Cook County judge had sided with Emanuel, rejecting the notion that he did not meet the residency requirement because he rented out his home in Chicago and moved to Washington to become President Barack Obama‘s chief of staff in 2009.

During the election board hearing on his case last month, Emanuel testified for 12 hours, taking questions not only from Odelson but also from more than two dozen citizens who had filed formal objections to his candidacy without the benefit of a lawyer.

Emanuel’s election lawyers had argued that the former congressman always intended to return to his home on the North Side after serving Obama. To buttress their claims, they had argued that Emanuel left family heirlooms, such as his wife’s wedding dress, in the basement of the house.

Through it all, Emanuel has said he feels that he never abandoned Chicago — an assertion backed up by another of his former bosses, President Bill Clinton, in a visit here last week to campaign for Emanuel. Clinton ridiculed the notion that Emanuel is not a full-fledged Chicagoan, saying everybody who worked with him was aware that he regarded the city as “the capitol of the world.”