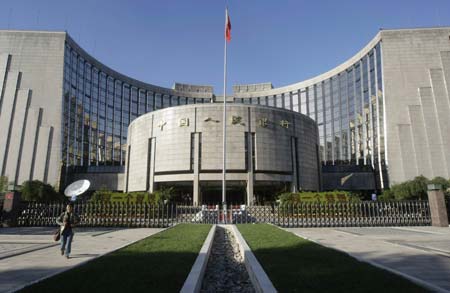 Jan. 11 (Bloomberg) — China’s foreign-exchange reserves climbed by a record last quarter and lending exceeded the government’s annual target, increasing pressure on the central bank to tighten policies to rein in liquidity and inflation.

The currency holdings, reported by the central bank on its website today, rose by $199 billion to $2.85 trillion, the biggest quarterly gain since Bloomberg data began in 1996. Full- year yuan-denominated lending of 7.95 trillion yuan ($1.2 trillion) compared with a target of 7.5 trillion yuan.

“All eyes are going to be on what new policies the central bank can bring to the table,” said Jinny Yan, a Shanghai-based economist at Standard Chartered. “But there’s still going to be a lot of excess liquidity in the market in the first half of the year.”

Yan forecasts three interest-rate increases this year with the first this quarter. Citigroup Inc. said today that the central bank may announce rate and reserve-requirement increases before or during a Lunar New Year holiday starting Feb. 2, to take effect afterwards.

The level of China’s currency holdings is a world record.

The Shanghai Composite Index closed 0.4 percent higher, paring a decline in the past year of about 13 percent. The yuan strengthened amid speculation that the central bank will allow gains ahead of President Hu Jintao’s visit to the U.S. next week. The currency climbed 0.3 percent to 6.6204 per dollar, the biggest jump since Dec. 30, as of 3:40 p.m. in Shanghai.

Gains in China’s currency holdings underscore global economic imbalances and claims that the yuan is undervalued, topics President Barack Obama has put on the agenda for his Jan. 19 meeting with counterpart Hu in Washington. The yuan has climbed about 3 percent against the dollar since officials scrapped in June last year a peg which had been in place since the global financial crisis.

Today’s data may indicate a “huge surge” in inflows of hot money, or speculative capital, according to Dariusz Kowalczyk, a Hong Kong-based economist at Credit Agricole. He estimated the current-account surplus contributed about 40 percent of last quarter’s increase. China yesterday reported a $13.1 billion trade surplus for December, the smallest in eight months, according to customs data.

Economists’ median estimate was for a $112 billion gain in the reserves after a $194 billion increase between July and September. China’s holdings may reach $3 trillion by June 30, UBS AG estimates.

The currency regulator is seeking to curb inflows of cash from investors attracted by China’s growth and the prospects for higher rates and a stronger currency. Officials are also testing measures to encourage Chinese businesses and investors to have more money offshore.

A program to allow exporters to park revenue in overseas accounts was expanded nationwide from Jan. 1. The government has also allowed citizens in the eastern city of Wenzhou to make direct investments overseas, according to a Jan. 7 local government statement.

M2, the broadest measure of money supply, rose 19.7 percent in December from a year earlier, the central bank said today, the fastest pace since May. Economists’ median estimate was for a 19 percent increase. New local-currency lending was a higher- than-estimated 480.7 billion yuan in December.

“Liquidity in the banking system will be more than abundant and the central bank needs to tighten more aggressively,” said Kowalczyk. He estimates reserve requirements will climb 150 basis points, with benchmark interest rates jumping 50 basis points, by the end of June.

For the biggest banks, ratios stand at 18.5 percent, excluding any temporary increases not publicly announced. The key one-year lending rate is 5.81 percent.

Officials will use differentiated reserve ratios to improve liquidity management, Governor Zhou Xiaochuan said in an interview published by the central bank’s China Finance magazine on Jan. 4. The system involves setting separate requirements for lenders according to their balance sheets.

The amount of cash in the economy could surge this quarter because of maturing central bank bills and the tendency for bank lending to be highest in the early months.

The People’s Bank of China will have 1.2 trillion yuan of bills issued through open-market operations falling due in the first quarter and 869 billion yuan in the second quarter, Kowalczyk estimated. Standard Chartered’s Yan forecast new lending in January could amount to 1 trillion yuan while Goldman Sachs Group Inc. says the figure could be higher.

“This is going to be a challenge for the PBOC to keep control over lending,” said Helen Qiao, a Beijing-based economist with Goldman Sachs. “But the so-called dynamic differential reserve requirement will act as a threat to any bank that extends too much lending that they will be punished.”

China’s four biggest banks may need to limit the growth in overall yuan lending to about 14 percent this year to avoid being punished under this new system, three people with knowledge of the matter said today. Outstanding local-currency credit rose 19.9 percent last year.