A deadly disease described as the “foot and mouth” of trees is wiping out forests across the country. 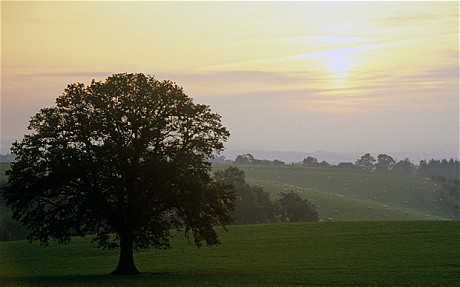 Trees are under threat from the fungal disease for which there is no known cure Photo: ALAMY

Sudden oak death arrived in Britain from America, where it decimated the oak population, just under a decade ago via imported plants.

In Britain the disease, officially known as phytophthora ramorum, spared oaks and jumped to rhododendrons and Japanese larch trees. In the last year it has taken hold along the west of the country in larch plantations, including more than 120 Forestry Commission sites, 20 National Trust properties and two Woodland Trust reserves.

Already 4 million trees have been felled or marked for destruction.

More are expected to be chopped down in the coming years because the warmer, wetter conditions expected with climate change encourage the spread of the disease. (LOL! When was the last time environment correspondent Louise Gray went outside or read the world news?)

In the latest cull, a landowner in the Quantock Hills in Somerset was forced to cut down 50,000 trees, while the National Trust chopped down 10,000 larch trees in the area. Landowners face crippling costs for felling sick trees, while walkers are urged to disinfect boots to stop P. ramorum, which is a fungal disease, spreading on their feet.

Philip Chambers, the owner of Milverton Sawmill, in Taunton, Somerset, said that landowners had been forced to pay to chop down larch trees even though the timber was worth very little because of oversupply.

He compared the situation to the foot and mouth crisis when farmers were forced to cull their cows to stop the disease spreading. “It is for trees what foot and mouth was for cows, except there is no compensation for the landed gentry,” he said.

Experts from the Forestry Commission are carrying out inspections across Britain and will order a cull wherever the disease is found.

It takes hold quickly, causing bleeding lesions, blackened or wilted leaves and, ultimately, death. It can also affect garden shrubs, such as rhododendron and camellia.

Charlton Clark, of the commission, said landowners could be offered a small grant to pay for the culls. “The equivalent of 4,400 football pitches of Japanese larch have so far been confirmed as infected with ramorum disease in the UK, and either have been or will be felled to prevent the disease from spreading,” he said.

There is no known cure for the disease and Mr Clark warned that Japanese larch could be wiped out in the South West.

The outbreak is one of a number of threats to Britain’s ancient trees.

A separate disease, acute oak decline, is killing oaks, while chestnut trees have been felled across the country because of infections spread by moths.

1 thought on “UK: Sudden Death for Thousands of Trees”