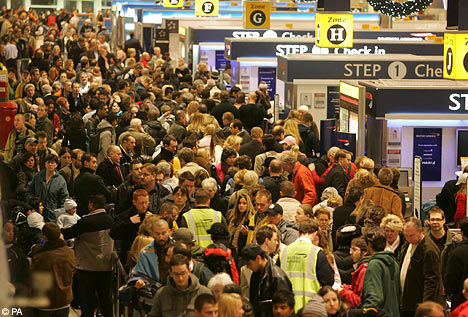 Customs officers were ordered not to look for drug smugglers at Heathrow over Christmas because of staff shortages.

An extraordinary email was sent to all staff at the UK’s busiest airport on December 23, telling them not to ‘actively seek to identify any passenger with internal concealments’.
The UK border – through which 100,000 people enter every day – was left open for three days thanks to the command, allowing possibly ‘scores’ of drug mules to get in.

Smugglers with hauls of cocaine, heroin and cannabis in their stomachs would have been waved through the airport, which handles 70million passengers a year.

Mark Kennedy, the UK Border Agency’s senior detection manager, blamed staff shortages for the order, which he said should be in force for 72 hours up to and including Christmas Day.

The email, leaked by a whistleblower, also warned officers that if they did arrest smugglers, they would have to work a 24-hour shift guarding prisoners.

It read: ‘We would seek your co-operation in managing this situation by asking that you do not actively seek to identify any passenger with internal concealments for three days up to and including Christmas Day.’

When the edict started, 90 per cent of flights had resumed following days of snow chaos.

Mr Kennedy – who could face the sack – said staffing levels were ‘very low’ on Christmas Day, making it impossible to transport ‘swallowers’ to hospital or guard them until they passed packages in a toilet.

At any one time, four or five ‘swallowers’ are in custody at the airport. Gangs already try to smuggle drugs through UK airports at Christmas because they know Customs are short-staffed.

Lin Homer, the head of the UK Border Agency, was said to be ‘incandescent with rage’. An officer added: ‘We’re waving the white flag because we haven’t got enough staff to cope. Officers are angry.’

The agency yesterday apologised for the email.

Deputy chief executive Jonathan Sedgwick said: ‘This email should never have been sent as this approach does not represent UKBA policy. Our aim is to prevent and detect the smuggling of drugs, however people try to bring it into the country.

‘Our drug enforcement teams have worked tirelessly over the Christmas period and have successfully intercepted several shipments of class-A drugs. We need to review what has happened here to ensure that this situation does not arise in the future.’

David Raynes, of the National Drug Prevention Alliance, said he was ‘astonished’ by the email.

Mr Raynes, a former senior Customs investigator at Heathrow, said: ‘It is a very crass instruction. I’m astonished that anybody issued it.

‘Customs work is a 24/7, 365-day-a-year job and Customs officers all know they have to work shifts, even at Christmas.

‘You would expect the same level of staff on any day of the year.

‘Stuffers and swallowers, as we call smugglers who swallow drugs, are an immense drain on resources because an officer has to be with them the whole time, but that is all part of the job. Customs officers in Heathrow are the best in the business and it’s astonishing they are being told not to identify potential smugglers.’

An agency source said: ‘As soon as the email was sent, phone calls started to try to rectify the situation.’

The UKBA is expected to launch a review into the incident.