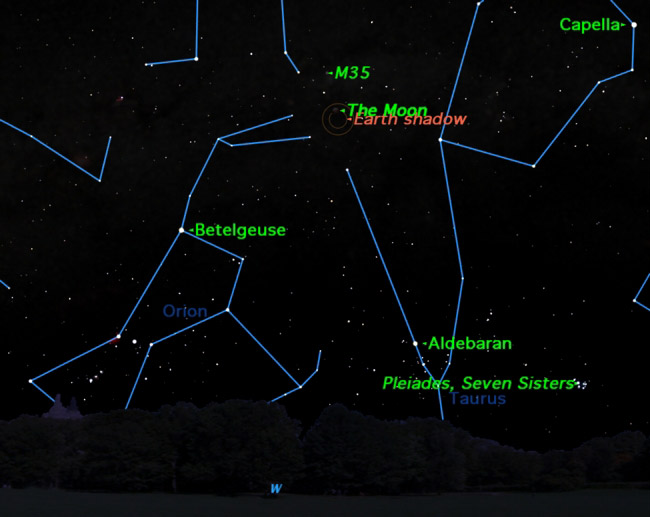 The eclipse will actually begin when the moon enters the faint outer portion, or penumbra, of the Earth’s shadow a little over an hour before it begins moving into the umbra. The penumbra, however, is all but invisible to the eye until the moon becomes deeply immersed in it. Sharp-eyed viewers may get their first glimpse of the penumbra as a faint smudge on the left part of the moon’s disk at or around 6:15 UT (on Dec. 21) which corresponds to 1:15 a.m. Eastern Time or 10:15 p.m. Pacific Time (on Dec. 20).

The moon is expected to take 3 hours and 28 minutes to pass completely through the umbra.

Color and brightness in question

During totality, although the moon will be entirely immersed in the Earth’s shadow, it likely will not disappear from sight.  Rather, it should appear to turn a coppery red color, a change caused by the Earth’s atmosphere bending or refracting sunlight into the shadow.

Since the Earth’s shadow is cone-shaped and extends out into space for about 844,000 miles (1,358,000 km), sunlight will be strained through a sort of “double sunset,” all around the rim of the Earth, into its shadow and then onto the moon.

However, because of the recent eruptions of the Eyjafjallajökull volcano last spring and the Merapi volcano in Indonesia in October, one and possibly even two clouds of ash and dust might be floating high above the Earth.  As a result, the moon may appear darker than usual during this eclipse; during totality, parts of the moon might even become black and invisible.

A careful description of the colors seen on the totally eclipsed moon and their changes is valuable.  The hues depend on the optical equipment used, usually appearing more vivid with the naked eye than in telescopes.  The French astronomer Andre-Louis Danjon introduced the following five-point scale of lunar luminosity (“L”) to classify eclipses:

L = 2:   Deep red or rust-colored eclipse, with a very dark central part in the shadow, and outer edge of the umbra relatively bright.

L = 3:   Brick red eclipse, usually with a bright or yellow rim to the shadow.

Examine the moon at mid-totality and also near the beginning and end of totality to get an impression of both the inner and outer umbra.  In noting an L observation, state the time and optical means (naked eye, binoculars or telescope) that is used.  We invite readers to e-mail their Danjon estimate for this eclipse (along with any pictures they’d like to share) to cmoskowitz-at-SPACE.com.

At mid-totality, from rural locations far from city lights, the darkness of the sky is impressive.  Faint stars and the Milky Way will appear, and the surrounding landscape will take on a somber hue.  As totality ends, the eastern edge of the moon begins to emerge from the umbra, and the sequence of events repeats in reverse order until the spectacle is over.

Interestingly, from most of New Zealand, a slice of northeast Australia, Papua, New Guinea, southwest Japan and Korea, the moon will rise during totality on the evening of Dec. 21. Because of low altitude and bright evening twilight, observers in these locations may not see much of the moon at all until it begins to emerge from out of the Earth’s shadow.

Conversely, much of the United Kingdom and parts of western and northern Europe will see the moon set during totality on the morning of Dec. 21. Because of low altitude and bright morning twilight, observers in these locations may not see much of the moon at all after it slips completely into the Earth’s shadow.

The last total lunar eclipse occurred on Feb. 20 to Feb. 21, 2008 and was visible from most of the Americas, as well as Europe, much of Africa and western Asia. In 2011, there will be two total lunar eclipses.  The first, on June 15, will be visible primarily from the Eastern Hemisphere and will have an unusually long duration of totality lasting one hour and 40 minutes.