Thousands of South Korean men too busy to date are finding solace in a new piece of technology – an iPhone application that offers lonely souls a virtual girlfriend. 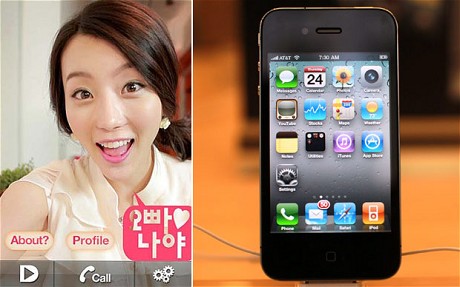 The Honey It’s Me! application enables users to interact with the voice of a twenty-something virtual girlfriend called Mina.

The application allows singletons to receive four video calls from Mina a day as well as a shower of love messages from a selection of 100.

A Korean model posed for the video calls and recorded an array of “girlfriend” comments, which range from “Are you still sleeping? Time for breakfast!” to “Good night, sweet dreams”.

The application – devised by South Korean company Nabix – attracted 80,000 downloads a day during the initial free launch period and currently costs a daily fee of £1.26 ($1.99).

Explaining why he created the device, Kim Yoon-Kak, head of Nabix, said: “I’ve developed this application to console people for their loneliness.” The company is planning to tap into a global market of lonely hearts with new versions to be launched in English, Chinese and Japanese, with an Android version also in the pipelines.

Meanwhile, it appears that the reception of the virtual girlfriend technology in South Korea has been increasingly positive among the numerous men too busy with work to find a real life girlfriend.

One user stated on Twitter: “It’s a blessing for all single men.” Another added: “Mina called me while I was working overtime. This is just great.”