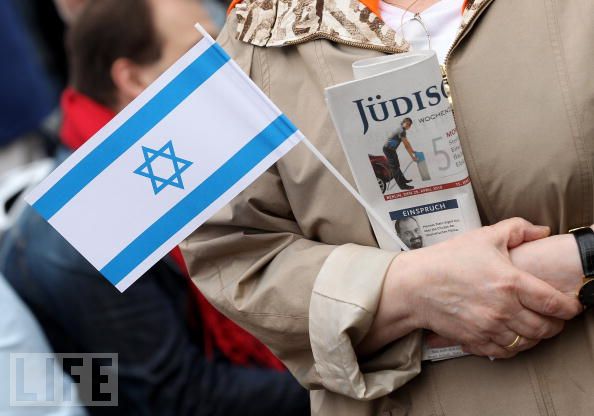 Since Israel defines itself as the ‘Jewish state’ we are entitled to consider what the word ‘Jewish’ stands for.

I tend to differentiate between three distinct (yet occasionally confusing) categories.

During my study of Zionism, Jewish politics, ‘identity politics’ and culture, I have managed to avoid embroiling myself in the complexity involved with the first category — I do not deal with Jews as a race or an ethnicity.  I also generally avoid dealing with Judaism (the religion). In fact, I am the first to admit that the only Jewish collective to support the Palestinians, are groups that exist within the Torah Jews. That such groups support Palestinian self-determination and autonomy is proof enough that aspects of religious Judaism can be interpreted as emphasising ethical precepts.

‘Jewish ideology’ is basically an amalgam of racially orientated exclusive arguments.  It is fuelled by assumptions about ‘ethno’-centric supremacy, and ideas such as ‘choseness’. Being a tribal setting then, Jewish ideology defies equality. It also opposes universalism. The followers of that ideology tend to believe that they are somewhat different and even better (chosen) than non Jews. And much Jewish political activity is a formulation, and expression of a tribal exclusive club that demands a ‘Jews only’ entry card.

While early Zionism presented itself as a promise to ‘resolve the Galut ’ (Diaspora) by ‘transforming’ the Diaspora Jew into an ‘authentic civilised’ human being — it is important to remember that the last few generations of Israelis have been born in Zion (Palestine) and are, therefore, not entirely shaped by Zionist ideologies. From a Zionist perspective, the modern Israeli is then, a ‘post-revolutionary’ subject.  And indeed, I myself, amongst millions of other Israelis, joined the Israeli army because we were Jews — not because we were Zionists.

Israelis do, however, follow what I define as Jewish ideology — They practise and perform a number of different measures that are there to maintain Jewish exclusivity on the land.   When 94% of Israeli Jews supported IDF’s murderous tactics against Gazans at the time of Operation Cast Lead, it wasn’t  Zionism that motivated them. It was the total lack of empathy with other human beings. It was blindness towards others. It was supremacy and chauvinism; or, in other words, it was the ugliest homicidal manifestation of their choseness.

Almost every aspect of Israeli politics, whether it is the ‘unilateral disengagement’ or the loyalty oath, can be grasped as an attempt to project and protect Jewish exclusivity on the land (instead of trying to resolve the Galut)

You may note that I neither refer to Jews as a racial or ethnic group; nor am I directing my critique towards Judaism, the religion. And whilst Jews can indeed succumb to what I define as ‘Jewish ideology’, (and many of them do) it is valuable to bear in mind they can also be its most virulent  enemies: Obvious examples are  Jesus, Spinoza and Marx, and one can also include Israelis such as Israel Shahak, Gideon Levy and others. It is also pertinent to mention that some early Zionists such as Nordau and Borochov were also strong opponents of Jewish ideology and culture — For them, Zionism was a necessary attempt to amend Jews. They believed that once dwelling on ‘their promised land,’ what had hitherto been perceived as ‘Jewish tendencies’, (such as ‘non-productive inclinations’), would disappear.

It should be obvious that I am in total support of the universal and ethical ideas that are coupled with the ODS (One Democratic State) and SOIC (State of its Citizens). I would  also be the first to endorse and explore any form of reconciliation between the indigenous people of the land (Palestinians) and the new comers (Israelis).

Yet, I believe that  for any possible and intelligible discussion to take place –we  surely must be able to freely explore the true nature of the ideology that drives the Jewish state, and Jewish politics around the world.

We must find a way to admit to ourselves that the Jewish ideological, political and cultural discourse is a tribal discourse: it is foreign to universalism and ideas of true equality. Also, we need to realise that the Israeli notion of ‘shalom’ (peace) is interpreted by Israelis as ‘security for Jews’ instead of reconciliation.

Unless we are brave enough to confront these issues, and discuss them freely, the pro- Palestinian movement is trapped in a futile discourse on the verge of self-indulgence.
Wednesday, December 15, 2010 at 9:50AM
Gilad Atzmon