Forcing down borrowing costs is the purpose?

No, the real purpose of QE is to destroy the US dollar, the middle class and the poor. 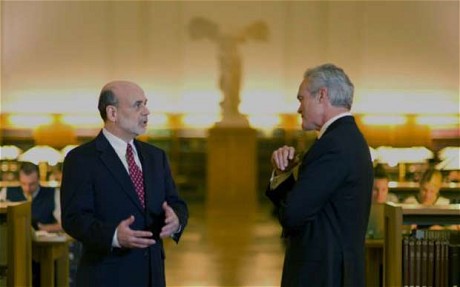 Ben Bernanke, the US Federal Reserve chairman, speaking during interview with ’60 Minutes’ in Columbus.

Transcripts suggest that Mr Bernanke is sufficiently worried about the risk of an economic relapse next year – and a slide towards deflation – that he is already mulling further “credit easing” or QE3 as it is dubbed. The US jobless rate spiked to 9.8pc in November, while long-term unemployment is the highest since the 1930s.

However, Mr Bernanke faces a shift in the balance of power as hard-liners join the Fed’s voting body this year. Jeffrey Lacker from the Richmond Fed said he was “not well-disposed” to bond purchases, suspecting that the “risks exceeed the benefits.” Kevin Warsh from the Fed board has raised doubts, as have the Fed chiefs from Dallas, Philadephia, Minneapolis, and Kansas.

Mr Bernanke’s stated purpose is to force down borrowing costs, yet inflation fears have instead pushed up yields on 10-year Treasuries by 60 basis points to 3pc since early October. Long rates are used to price mortgages and company debt. Oil has shot up to $90 a barrel. This acts as a tax on US consumers.

The push for QE3 comes as Democrats and Republicans play political chicken over the extension of the Bush tax cuts. Unless Congress can cut a deal by mid-December, taxes will automatically rise. Fiscal tightening will occur by default. Gridlock will also push up capital gains, prompting a likely stock sell-off as investors rush to beat the deadline.

The Senate voted against the Democrat package over the weekend, insisting that the renewed tax cuts should cover the rich as well as the middle class. President Barack Obama offered to compromise but only if his $150bn wish-list is respected, including tax credits for the working poor.

The Fed bought $1.7 trillion of bonds in its first round of QE and is now buying a second batch of $600bn, but the purpose has shifted from preventing a credit meltdown to the subtler task of creating jobs. This mission-creep has led to a backlash in Congress, with growing calls to limit the Fed’s mandate.

Mr Bernanke says stimulus can boost jobs, but this is a hotly-disputed area of economics. Monetary policy is a blunt tool against structural unemployment.