The big freeze will continue to grip Britain for weeks to come, forecasters said last night. 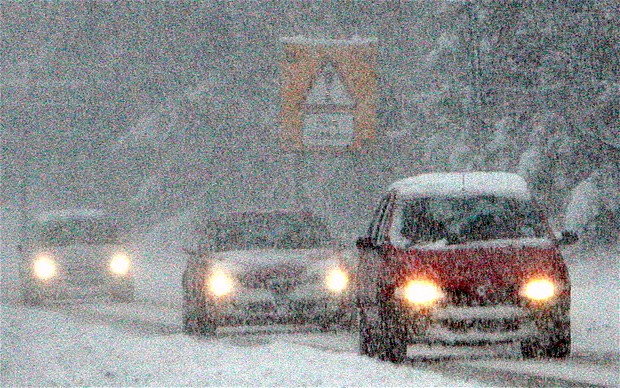 The predication came as more severe weather warnings were issued and parts of Scotland and North East England were hit by up to 16 ins of snow.

The snow will spread across the Pennines towards Manchester today and also move inland from eastern England towards the South East and London, the Met Office said.

A spokesman for the MeteoGroup forecasters said: “People should be bracing themselves for more cold weather for the working week and beyond.”

Gritters were out in force to clear main roads yesterday but conditions on minor roads in many areas were described as “treacherous”.

Police in the worst-hit areas warned motorists to drive only if their journeys were “absolutely essential” as the disruption caused by the earliest widespread snow for 17 years continued.

A spokesman for Northumbria police said: “Anyone going outside should consider whether their journey is critical and if they must venture out should dress appropriately.”

Ice brought chaos to roads in the worst-hit areas. The ambulance service for the East of England reported cars slipping and sliding into ditches, lampposts, fences and fields.

The AA said it expected to have dealt with more than 12,000 breakdowns by the end of the day, a 40 per cent increase on a normal Saturday in November.

A spokesman said: “There are lots of flat batteries and lots of people failing to get out of the driveway.

“Ice is causing a lot of problems. People have to remember to keep their speeds down and leave a bigger gap between themselves and the car in front.”

The worst-affected areas were around Newcastle, mid and north Wales, Norwich, Leeds and Bradford, he added.

Up to 12 ins of snow fell in Northumberland and Tyne and Wear yesterday, mostly in coastal areas, and several more inches are expected today.

In Cumbria, where Carlisle had several inches of snow, police said no roads had been closed but warned motorists to take extra care.

Trawscoed in Wales saw the mercury dip to minus 10.2C, while Dalwhinnie in the Scottish Highlands recorded minus 8.2C, and Glasgow minus 3.5C.

In England, Chesham in Buckinghamshire was among the coldest places at minus 7C and the temperature in Preston, Lancs, fell to minus 5.8C.

On Friday dozens of schools in Scotland, Northumberland, East and North Yorkshire and Wales were closed.

Thames Water has offered its meter readers and maintenance engineers the use of “anti-skate overshoes”, with studs on the soles, to prevent slips.

A spokesman said: “It’s icy out there right now, which causes more burst pipes and you can’t fix pipes if you’re floundering around like Bambi on ice.”

But while police warned motorists to make only essential journeys, the snow brought joy to many children.

In Darlington, Rick Rayner, 45, took his daughter Grace sledging in Green Park. “I have never known snow to come so early,” he said.

“Usually you have to wait until after Christmas to go sledging, but Christmas has come early for Grace this year.”

Skiers in Scotland were also happy. At Cairngorm Mountain resort near Aviemore in the Highlands around 1,500 people took to the slopes.

A spokeswoman said: “We’ve had a super day. It’s an excellent start to the season as it’s still very early in the winter.”