Wake up Ireland and watch this: 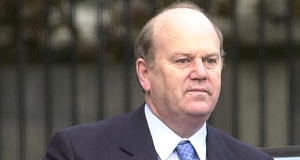 UP to €15 billion from the National Pensions Reserve Fund, set aside when the Celtic Tiger was still roaring, is likely to be used to recapitalise three of the country’s banks.

Amid speculation last night that the rate of interest to be charged on the EU/IMF bailout could be as much as 6.7%, Fine Gael’s finance spokesman Michael Noonan said that kind of rate was “far too high” and unaffordable on any reasonable projection of growth.

The Department of Finance said the interest rate had still not been finalised, but given that much of the loan would be repayable over nine years the rate could be higher than the 5.2% charged to Greece but would not be as high as the 6.7% being quoted by some brokers.

Meanwhile, Anglo Irish Bank, which was downgraded to junk status yesterday evening, is expected to be closed swiftly, together with the Irish Nationwide Building Society, under the EU/IMF loan plan.

Officials hope to finalise the details of the €85bn package later today and have EU finance ministers approve it tomorrow.

The emphasis in the plan is to avoid drawing down money from the bailout and rely in the first place on money from the Pension Reserve Fund for the banks, and on the €20bn the state borrowed earlier this year to part-fund next year’s national budget.

Economist at the Economic and Social Research Institute, John FitzGerald, said he believed it would be a good idea to use the money in the pensions fund to recapitalise the banks, and keep the EU/IMF funds in reserve in case they needed further money later.

“Using the €20bn in cash we have first would be good for the country in the short run. It would leave the opening debt for 2012 €20bn lower and interest payments would be €1bn less. It would also leave the national debt lower than forecast at the end of next year,” he said.

About €35bn of the total EU/IMF loan was being earmarked last night for the banks.

The Government would prefer not to tap this sum but keep it in reserve for contingencies during the three-year programme.

Instead, they will use the €15bn available to them in the pension fund to recapitalise Allied Irish Bank, Bank of Ireland and the Educational Building Society. They have already used the remaining €10bn from the pension fund to buy shares in AIB and BoI.

The Government had planned to split Anglo Irish Bank, which has already received €22.9bn of state money, into a bad bank destined to be shut down relatively quickly and a good bank that would hold the deposits Anglo still had.

The European Commission, however, said while the good bank could hold the deposits, it could not operate as a bank and must be shut down over the next decade. Now, however, under the terms being worked out with the EU/IMF/ECB team, the entire operation is likely to be shut down but it could still cost several more billions of euro to do so.

The Irish Nationwide Building Society, into which the state pumped €2.7bn, will also shut.

Since Allied Irish Bank has been unable to raise the €10.4bn it needs to recapitalise, the pension fund money will be used instead, while strengthening the also nationalised Bank of Ireland will cost about €1.5bn.

About €50bn is expected to be available from the EU- IMF package to cover the country’s funding needs over the next three years. But it is likely that the Government will first use the €20bn it raised on the markets over the summer.

If the markets have calmed and reduced Ireland’s borrowing costs closer to the 4.8% it averaged this year and last, the exchequer may decide to return to the markets rather than tap what could be more expensive money from the EU/IMF bailout.