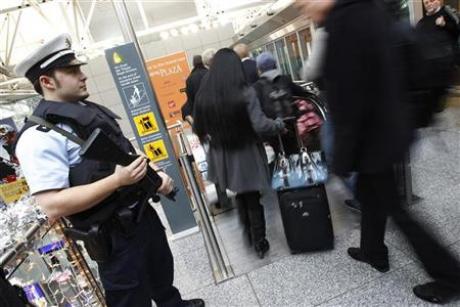 A police officers patrols inside the main terminal of Frankfurt’s airport, November 18, 2010.

Transportation Security Administration chief John Pistole acknowledged in an interview with ABC’s “Good Morning America” that scans and pat downs intended to find explosives and other weapons would offer little protection against any pilot determined to bring down an aircraft.  🙂

“We’ve had a number of very good discussions with pilots and hope to be announcing something very soon in terms of a good way forward for the pilots for that very reason, using a risk-based intelligence driven process,” he said.

Pistole gave no indication that screening rules for passengers are about to change, despite calls for alternative measures including Israeli-style one-on-one interviews with travellers.