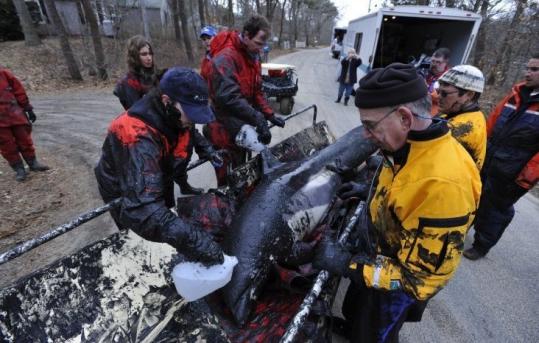 Rescue workers helped a dolphin on Lieutenant Island in Wellfleet, Mass., in March, when two groups of white-sided dolphins wounded up being stranded on Cape Cod. (Steve Heaslip/Cape Cod Times via Associated Press) By

WASHINGTON — New research into the cause of dolphin “strandings’’ — incidents in which weakened or dead dolphins are found near shore — has shown that in some species, many stranded creatures share the same problem.

They are nearly deaf, in a world where hearing can be as valuable as sight.

That understanding — gained from a study of dolphins’ brain activity — could help explain why such intelligent animals do something so seemingly dumb. Unable to use sound to find food or family members, dolphins can wind up weak and disoriented.

Researchers are unsure what is causing the hearing loss: It might be old age, birth defects, or a cacophony of man-made noise in the ocean, including Navy sonar, which has been associated with some marine mammal strandings in recent years.

The news, researchers say, is a warning for those who rescue and release injured dolphins: In some cases, the animals might be going back to a world they can’t hear.

“Rehab is pretty time-consuming and pretty expensive,’’ said David Mann, a professor at the University of South Florida and the study’s lead author. If the dolphin can’t hear, he said, “there’s almost no point in rehabbing it and releasing it.’’

The study, published Nov. 3 in the journal PLoS One, examined several species of marine mammals — including dolphins and small whales — living in the Gulf of Mexico, Atlantic Ocean, and Caribbean Sea. The animals had been found stranded in the wild and taken in for medical treatment and feeding.

Each year, from 1,200 to 1,600 whales and dolphins are found stranded off the US coast, according to the National Oceanic and Atmospheric Administration. The vast majority are dead: In 2007, the most recent year with data, only 195 out of 1,263 animals were found alive.

But many of those also die later or are euthanized on the scene. A few survive but are too young or too debilitated to be returned to the wild.

Of the 195 animals found alive that year, just five were released.

Trying to study what put these animals in distress, the researchers faced a puzzle. How do you test a dolphin’s hearing?

“They can’t raise their flipper’’ if they hear a tone, Mann said.

Instead, researchers looked for reactions to the sound inside the animals’ brains. The researchers affixed sensors to the creatures’ heads with suction cups, which could detect electrical activity in the brain. They then played a series of tones: If the animals could hear them, the sensors would detect millions of neurons firing to process the sound.

In some of the species they studied, the tests showed that stranded animals could still hear normally. Three Risso’s dolphins, two pygmy killer whales, and a spinner dolphin showed no problems.

But the researchers found severe to near-total hearing loss in two species. Among bottlenose dolphins, four out of seven stranded animals had hearing problems. Among rough-toothed dolphins, the total was five out of 14.

That, they said, could be a serious problem for animals that live in often-murky waters. Bottlenose dolphins often use sound to find each other: Each has a “signature whistle’’ all its own.

In addition to hearing sounds made by other creatures, dolphins also use their own sonar to hunt and locate the seafloor and other objects.

Scientists say these rapid-fire sounds — a series of clicks to human ears — return to give the dolphins information about the size and shape of prey.

“These animals are living in an environment where vision can’t play the same role it does on land,’’ said Randall Wells, a senior conservation scientist at the Chicago Zoological Society who was another of the study’s authors. “Sound is probably the most important sense that they have.’’

Without the ability to hear these sounds, scientists said dolphins can be helpless.