The Chinese elitists treat their own people like worthless shit and built their power on the desperation of the poor and on the destruction of the environment. 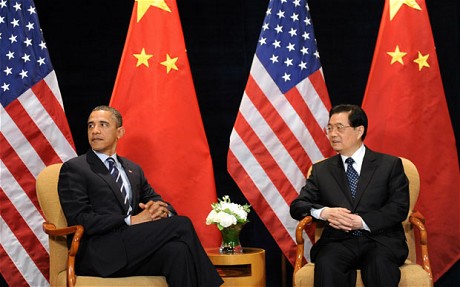 President Barack Obama (left) meets Chinese President Hu Jintao for a bilateral meeting in Seoul ahead of the start of the G20 summit  Photo: AFP/GETTY IMAGES

The leaders of the G20 group of rich and developing nations met in Seoul this week for what might reasonably be described as their first post-crisis summit. But it also had the feeling of the first post-Western summit. China, the world’s second richest nation and its rising power, believes that the financial crisis was actually a “North Atlantic crisis”. Now that the worst of it is over, Beijing sees little reason to swallow the medicine for someone else’s sickness. The summit therefore broke up – none too amicably – without really addressing the trade imbalances that were one of the root causes of the crisis, or America’s worry that Beijing is gaining an unfair advantage by artificially keeping its currency weak. Instead, China flexed its muscles and got what it wanted: a watered-down statement that will not force it to change course. If President Obama hoped that the G20 would burnish his image as a world statesman after the disaster of the midterm elections, those hopes were disappointed.

It is inescapable that we are witnessing a historic shift of economic power from West to East. David Cameron has certainly taken this on board, judging by the caution with which he and his Cabinet members treated China during their visit earlier this week. The Prime Minister approached the subject of human rights far more obliquely than he did as leader of the Opposition. Whether this was wise judgment or a failure of nerve is difficult to say. Although China treats dissidents with gross inhumanity, the more it is lectured on the subject, the more intransigent it becomes. In a sense, that is convenient for Mr Cameron: if protesting about repression makes the situation worse, then Britain can concentrate on trade with a fairly clear conscience.

Certainly, China is leaving Seoul with even more of a swagger in its step. Its regional ambitions are unchecked: if anything, they have been further provoked by America’s insistence that the resolution of territorial disputes in the South China Sea is a “national interest”.

As Western economies splutter, China’s roars along. Indeed, one doctrine that Washington and Beijing hold in common is the indivisibility of economic and political power, meaning that the souring of relations between the two is about far more than the balance of payments. China believes that its economic success reflects its superior culture. With the West demoralised, divided and introspective, other Asian countries, including China’s traditional enemies, are coming to believe that they have more to learn from Beijing’s state-directed capitalism than from liberal democracy. Hence the meaningless agreement at the G20 to refrain from “competitive devaluation” – why antagonise a country whose economy will, in terms of purchasing power parity, soon be larger than that of the United States?

Of course, there is no Confucian law which dictates that a meticulously controlled economy will grow for ever. China’s ferocious investment and devalued exports will only take the country so far: it must also find a way to grow internally by stimulating domestic demand. That is a tricky proposition, for there are plenty of sources of instability on the horizon. The “North Atlantic crisis” did not produce significant unrest – but if the Chinese economy falters in the middle of the largest-scale process of urbanisation in history, then the unspoken deal which has seen its population trade freedom for growth could unravel. For China’s leaders, holding on to power means continuing to deliver prosperity to their population. The role of the West in this process must be to persuade the Chinese government, and the Chinese people, that growth will best be delivered not by assertive nationalism and chauvinist mercantilism, but by co-operation and liberalisation (in both senses of the word). If successful, this would be the greatest foreign-policy achievement since the end of the Cold War.

The shock waves from China’s emergence as a great power are beginning to reverberate. The abiding question is what kind of power it will be.