Like the Roman legions vanquished in the Teutoburger Wald in Lower Saxony in 9 AD, the 17,000 police officers that marched into the woods around the nuclear storage facility in Gorleben in northern Germany on Sunday morning looked invincible. Police personnel from France, Croatia and Poland had joined in the biggest security operation ever mounted against protestors against the a train carrying nuclear waste to an depot in an isolated part of  Lower Saxony’s countryside.

Helicopters, water canons and police vehicles, including an armoured surveillance truck, accompanied an endless column of anti-riot police mounted on horses and also marching down the railway tracks into the dense woods. Tens of thousands of anti riot police clattered along the tracks, their helmets and visors gleaming in the morning sun, and wearing body armour, leg guards and carrying batons.

But by Sunday night, those same police officers were begging the protestors for a respite.

Trapped in black, icy  woods without supplies or reinforcements able to reach them because of blockades by a mobile fleet of farmer’s tractors, the exhausted and hungry police officers requested negotiations with the protestors. A water cannon truck was blocked by tractors, and yet the police still had to clear 5000 people lying on the railway track at Harlingen in pitch darkness. The largest ever police operation had descended into chaos and confusion in the autumn woods of Lower Saxony, defeated by the courage and determination of peaceful protestors who marched for miles through woods to find places to lie down on the tracks and to scoop out gravel to delay the progress of the “the train from hell.”

The police union head Reiner Wendt gave vent to the general frustration when he issued a press statement via the dpa news agency last night saying the police had reached exhaustion point and needed a break. Behind the scenes, a battle seemed to be raging between the police chiefs tucked up in their warm headquarters and urging more action and the exhausted officers on the ground.

The police on the ground won out. The Castor train – called a „Chernobyl on wheels“ because it has been carrying 133 tonnes of highly radioactive waste to an unsafe depot – was stopped in the middle of the countryside and Nato barbed wire was placed around it. Lit by floodlights and guarded by a handful of police, the most dangerous train on the planet was forced to a halt after a 63 hour journey across France and Germany.

The defeat of the legions at Teutoburg marked the end of the attempt by the Roman empire to conquer Germania magna. And the failure of the biggest ever police operation two thousand years later in the woods of Lower Saxony to tame women, elderly people and school children protesting the government’s nuclear policy, could well also go down as a turning point.

The Berlin government can no longer rely on the discredited mainstream media to control the way people see issues. Too many people recognise it to be a tool of propaganda. The government now needs to resort brute force to bludgon through decisions that enrich corporations and banks and impoverish everyone else. But the police forces  at its disposal are simply not sufficient given the scale of the protests now gripping Germany. Only 1,500 police reinforcements could be mustered on Morning from the entire territory to deal with road blockades by thousands of protestors aiming to delay the transport of the nuclear waste on the final leg of its journey.

The police officers were exhausted after shifts of 24 hours or more, often without any food or just a cappucino and snack bar, and they had nothing to look forward to but more of the same drudgery after a night spent four to a room in a Youth Hostel.

A leading figure in a German police police union Bernard Witthaut today even lashed out at the government for trying to drive through unpopular policies using the police.

„Whether in Stuttgart or in Wendland today my colleagues are simply not getting out of their anti riot gear because of the wrong decisions by the government,” he said.

Many police officers also expressed sympathy with the protestors’ aims.

The question now is: how long can the use of police to bludgeon protestors continue when the protests are reaching this scale? How long can Germany be governed by a semi authoritarian regime using brute force when the force at its disposal is so small? The German army cannot be deployed on this kind of mission without sparking even more outrage. A false flag terrorist operation will hardly wash when the people are so fed up with the government lies and the media lies. EU soldiers will find it hard to deal with the Germans. The German and EU secret police cannot infiltrate all of protestor’s organizations when there are simply so many.

The German people as a whole are on the march.

NGO chief Kersin Rudek spoke for many when she said:

„We have lost faith in the government until they prove that their politics is for the people and not for the corporations.“

She talked aboug the ”anger” among people at the „arroagance of the political class.“

As in the Stuttgart 21 railway protests, it was people from all walks of life,  a genuine grass roots movement, that arrived in Wendland to protest the decision by the CDU/CSU/FDP government to ignore a legally binding deadline to phase out nuclear power. Against the wishes of the majority, Bilderberg Chancellor Angela Merkel announced this autumn that 17 reactors would continzue for another 12 years at gigantic cost to the tax payer in subsisides.

The tax payers of Lower Saxony even have to foot the bill of  50 million euro for the police operation to protect the nuclear waste – and not the electricity companies making a fortune from the extravagant energy source while the government keeps investments in ground-breaking new renewable energy technologies such as the third generation solar cells at a neglible amount.

As in Stutggart, the police used savage force against peaceful demonstrators reinforcing the impression of a government out of control and refusing to respect the basic demoractic right of people to hold protests without being beaten to a pulp. Videos of the Castor transport on Sunday show police beating people with their trudgeons, punching them and throwing them to the ground. Police also used tear gas, pepper spray and water canon.

One clip shows a police officer using his fist to punch a man lying on the railway track in the head.

About a 1000 people were injured, it is reported. 950 people are reported to have suffered eye injuries due to pepper spray and tear gas, according to a spokesperson of “Castor schottern”. Another sixtreen protestors suffered broken bones. There were 29 severe head wounds. Two people had to be taken to hospital.

One person had to be taken by helicopter after suffering multiple bone fractures after being trampled by a police horse.

But as in Stuttgart, the people did not give up in spite of the risk of savage beatings at the hands of the police. They insisted on their civic right enshrined in the constitution to hold peaceful political protests.

More than 50,000 people from all parts of the country and all walks of life attended a rally on a field close to Dannenberg. Thousands then marched through the autumn woods, splitting into small groups to descend into the valley, break through police lines to chain themselves to the rails or remove gravel from the  tracks to delay the train.

According to Spiegel, 7000 people alone took part in the road and railway blockades.

An armoured police car was set on fire by masked men but it is not clear if this was an agent pravocateur acting to discredit the protestors. A video show a man able to walk up to the armoured car and set it alight unhindered.

The overwhelming number of protestors were peaceful.

In spite of the sub zero temperatures and ground frost, up to 5000 protestors  lay down on the railway tracks at Harlingen late in the evening and refused to move. Supplies of hot tea, food and blankets were brought to them by mobile kitchens. Fires were lit to help stay warm.

The police worked from midnight until 7 am to clear protestors blocking the track, dragging many to an open air „prison concentration camp“ where people were forced to sleep in fields surrounded by police trucks.

This morning, the protestors have regrouped today and thousands are reported to be preparing to block the transport by road of the nculear waste from Dannenberg to Gorleben.

The organisers of the protest kept journalists and the public informed using live tickers, press releases and at Infopoints so that the whole country could follow the events outside the mainstream media. Radio Wendland is also broadcasting updates on the incredibly heroic resistance of so many people. At great personal risk, tens of thousands of people gave an example of courageous and peaceful non-violent resistance that will surely go down in history.

If this is the resistance for Castor and Stuttgart 21, just imagine what will happen when Germans finally grasp the scale of the banking scam being carried out by their „elite.“

The CDU/CSU/FDP government has already hit record lows in the polls and after Sunday’s savage police operation against peaceful protestors, support for them is sure to plummet further.

The feudal lords without a feudal army to push through their agenda of robbery are facing the end of the road now that their media propaganda apparatus based on the Springer and Bertelsmann empire is falling apart and their strategy of divide and rule thorugh a false left/right political paradigm is no longer working.

A new freedom and power was born in the woods of Wendland. And it belonged to the people who have had enough of the arrogant authoritarian political class.

Here is what happened in Stuttgart before:

Some of those violent protesters, mostly families with their children and students, were throwing chestnuts at defenseless riot police in full gear.

Here is a picture, sent by a reader, on how police officers prepared themselves for Stuttgart 21 protesters: 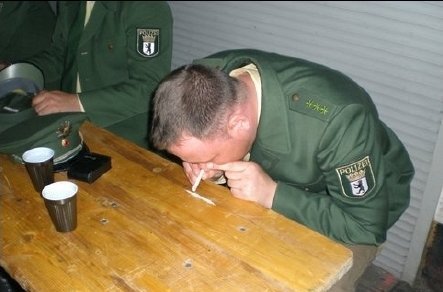