Oct. 27 — Today is Climate Fools’ Day. To celebrate, here is an essay courtesy of Simon Barnett to show how your money is being squandered by the Coalition on “Climate Change”.

The 2008 Climate Change Act commits Britain to cutting its CO2 emissions by 80 percent by 2050 at a cost of £18.3 billion every year for the next four decades (according to the Department for Energy and Climate Change website).

This is being funded by top slicing the cash from your energy bills. The figure does not include other costs, such as the losses incurred due to the economic damage and opportunity costs of these measures. And obviously the law only seeks only to address CO2 emissions from the UK.

Without pausing to question how that 80 percent target is to be attained short of closing down the entire economy I’d just like to demonstrate the sheer scale of the cost of this bill with a little help from my beautiful assistant, H.R.H. Queen Elizabeth II. Here she is below on the fifty pound note, the largest denomination note in common circulation, and guaranteed to win friends and influence people wherever she goes… 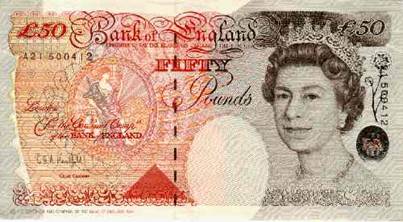 Also assisting me in my demonstration will be “red stick man” who is participating primarily as a visual reference to scale, but you can call him “Red Ed” if you’d like (to apportion blame). Here he is demonstrating that a million of the above notes (50 million pounds) will fit neatly onto a standard pallet… (h/t) 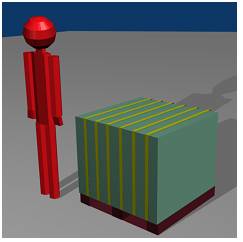 And here he is again, this time demonstrating what one billion pounds sterling looks like (now we’re getting into the real money and Ed seems to have started sweating)… 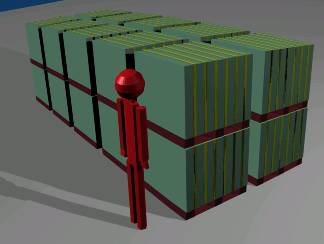 So the governments own estimate of £18 Billion per year is a huge pile of our cash that would look like this (Are you alright, Ed? You seem to have gone a bit green)…

Remember, our light-green-fingered politicians (of all political stripes) want us fork over a similar pile of cash to their chums in ‘green subsidies’ every year for the next four decades!!! That soon adds up to quite a tidy pile. So now let’s play: “where’s Ed?”…

Assuming that at least some of that cash doesn’t get spent on duck houses, that is one hell of a cure! But can we visualise the size of the problem it is supposed to fix?

The blue drums represent water vapour and the yellow drums represent naturally occurring Co2 (from the oceans, rotting vegetation and volcanoes – note here that a good volcano could easily wipe out several years of any anthropomorphic Co2 savings we might make). We can’t do anything about the anthropomorphic Co2 in the red drums because it is produced in developing countries like China and India who have no intention of hamstringing their economies to keep up with the latest eco-fad.

Anthropomorphic Co2 from the industrialised nations is represented by the green barrels… but wait! Remember the political slush-fund described above is for the UK only. There are over a billion people just in Europe and the US alone, and only 60 million in the UK. So what Co2 reduction does our £18 billion a year buy us in real terms? Out of 55,000 gallons the UKs total contribution is arguably *drum roll* less than one gallon (about six and a half pints). In that context even an 80% cut is – quite literally – a drop in the ocean.

Maybe it’s just me, but doesn’t the “cure” sound worse than the problem? A bit like amputating your leg to “cure” your in-growing toe nail? A bit Nongqawuse? But surprisingly few of the politicians, bankers, civil servants, trans-national bureaucrats, academics, activists and energy companies who stand to receive a slice of this funding bonanza seem to see it that way. And who can blame them? Remarkably few of those pallets would be enough to turn most of us into true believers.

After 15 years of what climate science calls “negative warming” (i.e. cooling; and despite unchecked Co2 levels) I must confess I was already sceptical about the likelihood of human Co2 having the catastrophic outcomes described in some academic requests for funding. Especially not when much of their proof comes from weather monitoring stations sited within feet of air conditioning outlets and when we discover that their results are “homogenised” by interpolation with hardcoded variables.

I know what you’re thinking and I’ve heard about the “consensus” too. But when you can actually prove something you don’t need a consensus. That’s why you never hear about the consensus on gravity, or the consensus on evolution. Saying that 97% of climate scientists believe in global warming is an awful lot like saying that 97% of priests believe in God. If they didn’t at least pretend to believe in global warming climate change climate disruption they wouldn’t be climate scientists – not of the sort that get public funding, anyway. And when those “scientists” have to delete their own source data to prevent it from being released under freedom of information laws they deserve the scare quotes because at that point they have stopped being a credible science and have become just another bunch of religious extremists.

Simply put, the shoddy and disreputable field of climate “science” still has an awfully long way yet to go to actually prove that our six and a half pints of co2 are a problem of sufficient magnitude to justify such an obscene amount of public cash. Not when we are the only nation currently prepared to eviscerate our economy in such a way, making the entire exercise a futile gesture from the outset.