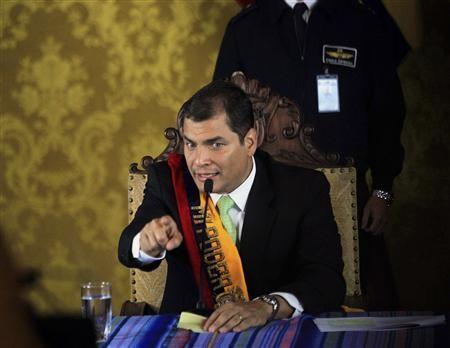 Post-9/11, Washington sponsored four coup d’etats. Two succeeded – mostly recently in Honduras in 2009 against Manuel Zelaya, and in Haiti in 2004 deposing Jean-Bertrand Aristide. Two others failed – in Venezuela in 2002 against Hugo Chavez, and on September 30 in Ecuador against Rafael Correa – so far. Two by Bush, two by Obama with plenty of time for more mischief before November 2012.

From his record so far, expect it. He continues imperial Iraq and Afghanistan wars and occupations. In addition, Pakistan, Yemen, Somalia, Palestine, Lebanon, North Korea, and other countries are targeted, besides deploying CIA and Special Forces armies into at least 75 countries worldwide for targeted assassinations, drone attacks, and other disruptive missions.

“Ecuadorean soldiers stormed a police hospital Thursday night in Quito where President Rafael Correa was held by rebellious elements of the police forces, and rescued him amid an exchange of gunfire….”

Coup plotters shut down airports, blocked highways, burned tires, and “rough(ed) up the president.” They also took over an airbase, parliament, and Quito streets, the pretext being a law restructuring their benefits, despite Correa doubling police wages.

In fact, Washington’s fingerprints are on another attempt against a Latin leader, some (not all) of whose policies fall short of neoliberal extremism.

A tipoff was State Department spokesman, Phillip Crowley, saying we’re “monitoring (not denouncing) the situation,” much like it refused to condemn Zelaya’s ouster, instead calling on “all political and social actors in Honduras to respect democratic norms, the rule of law, and the tenets of the Inter-American Democratic Charter.” Most other Latin states demanded his “immediate and unconditional return,” whether or not they meant it.

Washington opposes Correa for Ecuador’s ties to Hugo Chavez and Bolivarian Alliance of the Americas (ALBA) membership, a WTO/NAFTA alternative based on principles of:

— cooperation, not exploitation; and

— respect for each nation’s sovereignty, free from corporate and outside control.

Though falling short of these goals, ALBA nations, in principle, pledged:

— to benefit and empower their citizens;

— provide essential goods and services; and

ALBA membership, however, signals opposition to US hegemony, especially its neoliberal model, dominance, dismissiveness, and one-way trade deals for the Global North over the South, the curse Latin states have endured for decades, besides earlier US-sponsored coups and belligerency.

Before his rescue, police spokesman Richard Ramirez told AP that “the chief of the national police, Gen. Freddy Martinez, presented Correa with his irrevocable resignation because of Thursday’s events.”

Correa remained hospitalized….one person was killed and dozens injured during (street) riots.” After Ecuadorean military and special police forces rescued him, Correa told the national radio in a phone interview:

“This is a coup d’etat attempt by opposition forces. They resorted to (violence) because they will not win the election. I call on the citizens to stay calm.”

After being attacked by tear gas, he was hospitalized, then prevented from leaving when rebel police and coup supporters surrounded the building. Inside he said, “It seems that the hospital is under siege….(The) conspiracy (was) planned long ago,” and he knows where. He added, “I will leave (the hospital) as president, or they will have to carry my corpse out of here.”

His government declared a state of emergency. Flights from Quito’s Mariscal Sucre International Airport were suspended, then resumed early October 1. In addition, scattered violence and looting was reported in several Ecuadorean cities, including the capital.

Freed by soldiers, a visibly angry Correa addressed a huge crowd of supporters from the presidential palace, saying:

“Ecuadorean blood, the blood of our brothers has been needlessly spilled. You have mobilized to support the national government….the citizens’ revolution, democracy in our fatherland. When we realized we couldn’t talk and wanted to leave, they attacked the president. They threw tear gas at us, straight at our faces. They had to take me to the police hospital where they held me hostage. They wouldn’t let me leave. They shamed the institution (the police). They will need to leave the ranks.”

While still captive, Foreign Minister Ricardo Patino urged supporters to “walk peacefully to the hospital, where the president is blocked by (rebel) police officers.” On arriving, they shouted, “This is not Honduras. Correa is president. Down with the coup, down with the enemies of the people.”

Before the coup attempt, “Correa seemed an untouchable figure in Ecuadorian politics. However, his presidency might very well be defined by the outcome of this day, and his political projects may rest on the results.”

Correa “made a triumphant return to the presidential palace after loyalist troops rescued him from a police rebellion amid gunfire and street clashes that left at least two dead” and dozens wounded.

“The rescue capped a dramatic day of violence and confusion that began early Thursday” when rebel police assaulted him.

After his rescue, Correa thanked the military and a police special operations unit, saying:

“If not for them, this horde of savages that wanted to kill, that wanted blood, would have entered the hospital to look for the president and I probably wouldn’t (be) telling you this because I would have passed on to a better life.” Supporters are grateful not yet.

At the same time, there’s “legitimate protest by trade unions against Correa’s austerity plan, which the right exploited, seeing the pro-Correa forces divided.” In addition, some NGOs and “supposed Indian groups who tacitly supported the coup are on the take from America’s National Endowment of Democracy (NED) and USAID,” the usual suspects with a long disruptive history throughout the region and beyond.

Their operatives weren’t on the streets visibly, but they expressed no opposition to coup plotters. Instead, “Their statement called for the government’s replacement,” meaning it’s Obama administration policy – not for Correa’s domestic policies, says Petras. It’s for his “ties with US arch enemy Chavez and ALBA.”

Stephen Lendman lives in Chicago and can be reached at lendmanstephen@sbcglobal.net. Also visit his blog site at sjlendman.blogspot.com and listen to cutting-edge discussions with distinguished guests on the Progressive Radio News Hour on the Progressive Radio Network Thursdays at 10AM US Central time and Saturdays and Sundays at noon. All programs are archived for easy listening.